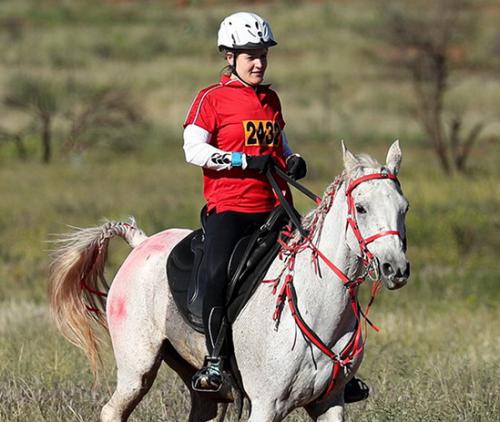 Former Louis Trichardt resident Lanel van Niekerk (27) is still making the Soutpansberg proud by not only winning the recent South African International Challenge (SAIC) endurance race over 160km, but also setting up a new South African record for the race.

Many residents may remember Lanel best under her maiden name, Van Niewenhuizen. She and her horse, a mare called Jozami Zanica, competed in the race on 27 April at the Bona Bona Game Lodge near Klerksdorp.

Lanel and Zanica also attempted the race in 2018, but had to withdraw from the event after Zanica injured her tendon after 100 km. “We were very disappointed but made sure we took the correct measures to treat Zanica’s injury so she could come back again in 2019,” said Lanel.

The start to the 2019 SAIC was a nervous one as Zanica was rested till December 2018. “She only participated in one race the beginning of the year, and I was not sure how she was going to react if we put so much pressure on her after the long rest to recover from her injury. About a month before SAIC, Zanica got hurt on the farm where another horse fell into her back legs while training. Keeping the faith, we believed everything was going to work out.”

Everything worked out well for Lanel and Zanica from the start of the race. “I was behind the front horses after the second leg by about 10min. I was only able to catch up to them by 120km. After the 120km loop, a vote was called on my horse, as she was not 100% sound. With her second trot out, she was fine and we found something under her pads, which caused a pressure point,” said Lanel.

Because of heavy rains the previous week, the humidity at that stage was very high. “The horses’ pulses struggled to come down and I as a rider felt the humidity from all the thick, ankle-deep mud. The water was so deep at one section it reached my horse’s stomach. I was even feeling a bit faint. At that stage we were six horses in the lead,” said Lanel.

Lanel and Zanica pushed on and on the final loop they departed fourth, a few minutes behind the first horse. “The last loop Zanica knew it was time to give it everything we had. We caught up with the front horses and the race was on. We were traveling between 30 and 40km per hour. Over the last stretch, entering the camp close to the venue, Zanica was very strong and pulled away from the other two horses, who were right beside us. We finished the race in 8:17:52 with a last loop of 28.9km per hour, setting up a new South African record over 160km,” said Lanel.

SAIC is the biggest endurance race event in South Africa. Apart from the new South African record for the event, Zanica was also awarded Best Condition Horse and Best of Best. “Zanica and I had a truly blessed race, and I am so grateful that she recovered from her injury,” said Lanel.