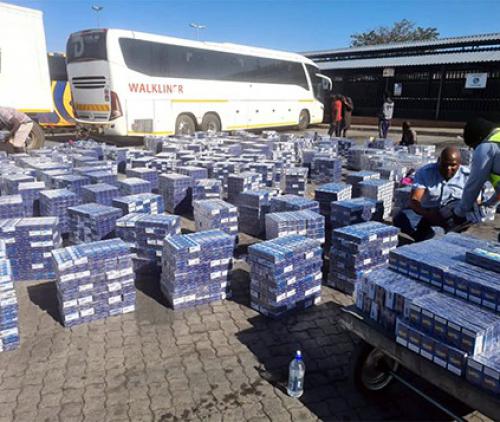 The police intercepted more than R3 million worth of illegal cigarettes at Beitbridge. Photo: Limpopo SAPS.

According to provincial police spokesperson Brigadier Motlafela Mojapelo, this bust follows a similar big bust last year when illegal cigarettes worth about R6 million were intercepted at the same border. In a police statement, Mojapelo said that the police had received a tip-off about a bus with a trailer carrying smuggled illegal cigarettes in the vicinity of Beitbridge. The police spotted the bus and conducted a search. In the trailer, they found 239 boxes of illegal Remington Gold cigarettes and 35 loose cartons.

Following the find, the bus driver and bus conductor were arrested, while a third suspect managed to evade arrest.

The 32-year-old bus driver, Mzolo Sithembiso Ephraim, and 37-year-old bus conductor Havemore Sabali appeared in the Musina Magistrate’s Court on Monday. Both appeared on charges relating to the Customs and Excise Act regarding illegal cigarettes. They were remanded in custody until 19 July for profiling and a bail application. In the meantime, the search for the third suspect continues.

Hadebe thanked the public for continuously assisting the police in the fight against crime.