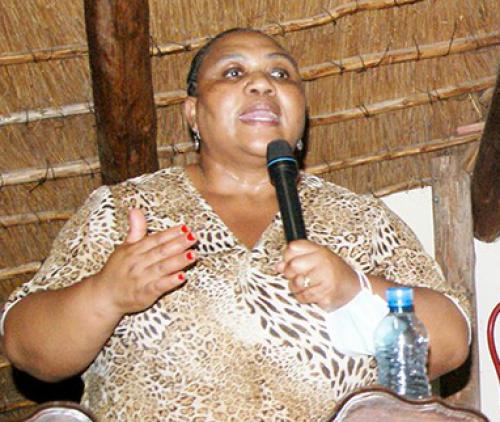 Farmers, big and small, need to work together

The Minister of Agriculture, Land Reform and Rural Development, Thoko Didiza, said agriculture played a very big role in the economy of South Africa. She was speaking during an interactive session with farmers, interested individuals and other stakeholders at Musina last Friday.

The session was meant to get first-hand information from the farmers and understand the challenges hindering their progress in their daily farming activities. Approximately 50 delegates attended the session, which took place at Musina Lodge.

Didiza said in the spirit of nation building, local commercial farmers should collaborate with subsistence farmers to build a sustainable economy. “It is upon all the local farmers to turn the tide economically by working together to build the economy of our country. Through your local farming associations, you can partner and work together to reverse the damage that was created by the past injustices. We can create an incredible economic hub, using agriculture as a basis. Government will continue to support farmers because without them, we would all starve and perish.”

Richard Makwasena, who represented the Musina Shashe Farmers Association, appealed for financial support from the minister. He said small-scale farmers like himself could not fully realise their farming potential because of a lack of funds. “It becomes very difficult for us as small-scale farmers to work, due to our poor financial background. We know that the whole nation depends on farmers for food security, but financial challenges stand in our way to successfully feed the hungry nation. If we are supported financially, it would be easier for us to produce more food and to create employment for our fellow community members.”

Makwasena urged the government to relax some of the criteria, so that even the poorest of the poor can get access to land. “We understand that government has opened up applications for the lease of land for the purposes of farming. We want this land to be accessible to all farmers because it is the basic commodity on which we must start our farming. We also appeal for mentorship for small-scale farmers, so that they can grow and expand their farming businesses with ease.”

He said local farmers were also worried about the high number of cattle and donkeys that crossed into South Africa from Zimbabwe. “Besides causing accidents on our roads, we are worried that they can infect our animals with diseases. We urge the government to help us in this regard.”

Well-known Musina entrepreneur Jack Klaff urged the minister to intervene in the water challenges in Musina. He said they had enough water in Musina, but the daily supply was a problem because of administrative issues. He said if the water supply became stable, farmers would be able to work easily while food security and job creation would get a major boost.

Some of the farmers, representatives of stakeholders and interested individuals who attended the event.