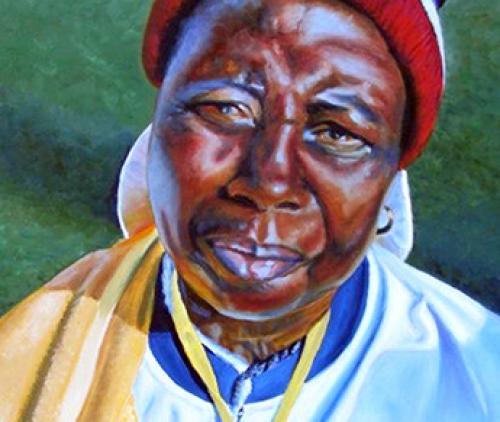 The painting that awaits her owner.

“Vho -Esther, your painting awaits you!”

A print of a beautiful oil painting of a Vhavenda woman is “looking” for its owner. When the painting was done some 10 years ago, a promise was made to the woman that she would receive a copy, but, unfortunately, the gracious lady could not be traced.

The painting was done by well-known Cape Town-based fine artist Trish Haye. “I met this lady in the grounds of the Castle of the Cape of Good Hope. She was part of a Venda choir group visiting Cape Town. I loved the colours of her outfit and the pride and dignity she exuded. She gave her permission for me to paint her,” explained Trish in a description of the painting on the website, SouthAfricanArtists.com.

“For me, she represents all the Black women of South Africa, who raise their children, their neighbours’ children, other people’s children, their grandchildren, but they do so lovingly and without complaint. She has such dignity. I thank her and women like her who have been and still are the backbone of our nation,” she said.

Trish Haye has received numerous accolades for her work in the past two decades. She was born in East London but was raised on a farm outside Nelspruit. She moved to Cape Town as a teenager and studied graphic design at Cape Town Technikon. She discovered oils in 2006 and had studio space at the Good Hope Art Studios based at the Castle. She spent three years working there along with many fellow artists from as far afield as the DRC and Zimbabwe.

Probably her best-known work is a painting she did for the Department of Economic Development and Tourism, who used it to promote the 2010 Soccer World Cup. The painting, “Crystal Ball: Soccer is my World, My World is Soccer”, was used as part of the permanent exhibition.

Trish explained that she caught sight of some ladies from a traditional choir from Venda during their visit to the city some 10 years ago and requested to capture some pictures of them in their stunning traditional regalia. She also noted down their contact details, so that she could paint a picture of one of them and share it with the lady.

Now, 10 years later, she is looking for the subject of her painting, so that she can hand her the painting on fabric canvas. “I took a number from the gentleman who seemed to be managing all the ladies in the group and promised to call them if I ever made a painting.”

When the painting was complete, she tried at least three or four times to call and even SMSed the number, but to no avail. “When I phoned, they couldn’t understand me and we got nowhere,” she said. “So, unfortunately the lady in the painting, Esther, as I was told her name was, has never seen the painting,” said Trish.

The painting of Esther was recently accepted for an exhibition at the Zeitz Museum of Contemporary Art Africa. This museum, located at the V&A Waterfront in Cape Town, is the largest museum of contemporary African art in the world. The museum re-opened on 22 October with an exhibition entitled “Home is where the art is”.

“I thought it would only be fitting to do my very best to find Esther. I would love to give her or her family a canvas print of this painting,” she said. “My problem is the language barrier, and how to communicate this to any Venda-speaking people to spread the word.”

She added: “I’m hoping that now that we have WhatsApp and social media, if we spread her picture and the story, we may just be lucky enough to find her.”

Those who know the painted lady or her family can contact Trish Haye on 083-2619893 or at TrishHaye@gmail.com.