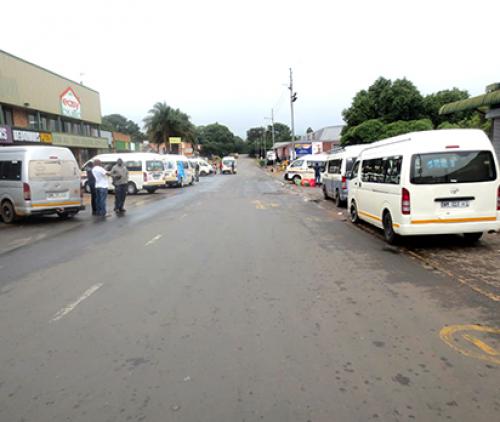 The situation at the taxi rank in central Louis Trichardt on Friday morning.

Early indications are that local taxi operators are heeding the call by President Cyril Ramaphosa to unite in the fight against the COVID-19 pandemic.

On Friday morning, the situation at the taxi rank in Louis Trichardt’s CBD was very quiet. The regulations stipulate that taxi operators may only ferry passengers between 05:00 and 09:00 and again between 16:00 and 20:00.

“We have to abide by what was announced by the Minister of Transport,” said one of the taxi operators while waiting for the next slot to arrive. He said business was quiet, but they had to absorb this setback. “Usually by this time (09:30), I would have completed two to three trips, but I have only made one trip from Kutama to Louis Trichardt. I was not stopped, but I noticed police along the way,” he said.

The taxi drivers said that they were only allowed to transport eight passengers at a time in a taxi that would normally transport more than double that number. Strict restrictions are placed on the number of passengers that may be transported with different types of vehicles.

Tshilidzi Victor Luvhimbi, another driver who operates on the Siloam route, said that his taxi association had supplied them with disinfectant spray, which they used to sanitize taxis and the hands of passengers. “We sprayed the Siloam rank in the morning and I also sprayed in the taxi,” he said. He said that he felt sorry for the passengers who had come into town to do some quick shopping, because now they had to wait until 16:00 before they could return home.

Luvhimbi mentioned that he had made only one trip between 05:00 and 09:00. He said that the limitation on the number of passengers made things very difficult, because many people had to wait until another taxi came along with room for them.