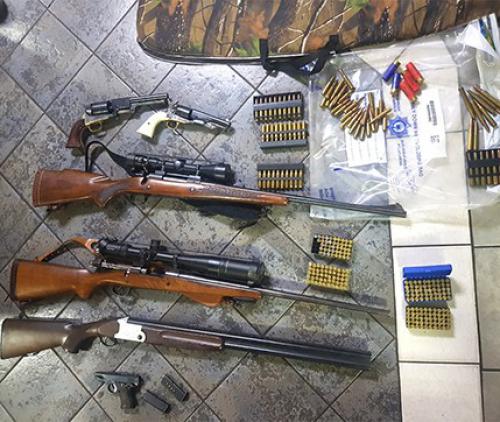 The firearms and several rounds of live ammunition that was recovered by the police following the arrest of four suspects the past week in connection with a house robbery and attempted murder case. Photo: Limpopo SAPS.

A well-coordinated Intelligence driven operation that was established to track down suspects in a house robbery and attempted murder case on the farm Roux & Roos in the Waterpoort area, yielded positive results when two more suspects aged 27 and 43 were arrested in the Tshikota township on the outskirts of Louis Trichardt on Thursday.

At about one o-clock on the morning of Tuesday, 7 January, three suspects armed with firearms allegedly attacked farm workers who were sleeping in one of the farm Roux & Roos’ compounds. During the robbery, one of the farm employees was shot and wounded.

Waterpoort police reacted swiftly to a call for help, but the three suspects managed to evade arrest in a Toyota Land Cruiser they had just stolen from the same farm. The suspects later abandoned the Land Cruiser on which they had already loaded 20 stolen solar power panels and several other stolen household items.

Two of the three suspects (aged 25 and 40) were arrested on the same day at about 17:00 with the help of the region’s rural safety structures. They were later linked to a burglary incident that occurred during December 2019, in which 11 firearms were stolen. “They will possibly be linked to other serious cases,” said provincial police spokesperson Brigadier Motlafela Mojapelo.

Following the initial arrests, an Intelligence driven operation was launched to track down the third suspect. This led to the arrest of another two suspects in Tshikota on Thursday, with one of them being linked to the Roux & Roos armed robbery.

Following the arrests of the two suspects in Tshikota, police managed to recover several firearms, live ammunition, gun magazines, cell phones, a plasma television set and several other items believed to have been stolen during house robberies.

Provincial police commissioner Lieutenant General Nneke Ledwaba has commended the SAPS members and all other stakeholders, including the rural safety structures, for a well-coordinated operation that led to this breakthrough.

The two suspects arrested on Tuesday appeared in the Louis Trichardt Magistrate’s court on Thursday. They were remanded into custody until their next court appearance on 16 January. Their alleged accomplices that were arrested on Thursday will appear in the same court on Monday, 13 January. “The suspects are facing charges of attempted murder, house robbery, unlawful possession of firearms and ammunition and possession of suspected stolen properties,” said Mojapelo.