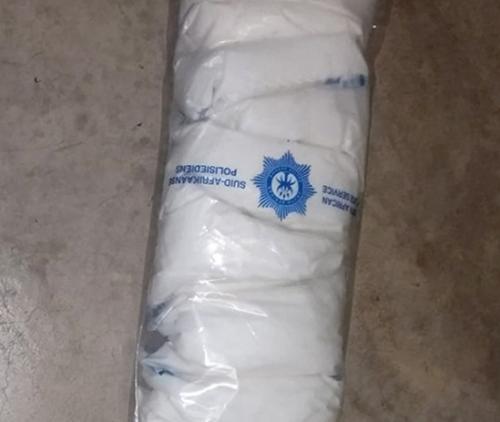 The 15 bags of the drug crystal meth, with an estimated street value of over R2 million. Photo: Limpopo SAPS.

Two nabbed for drugs and counterfeit goods worth millions

The South African Police Service in Limpopo made a major breakthrough by seizing drugs and counterfeit goods worth millions over the weekend.

Two suspects, one of whom is a woman, were arrested in two separate incidents in the Makhado and Modimolle police clusters.

According to provincial police spokesperson Col Moatshe Ngoepe, the police were allegedly performing their normal duties at the Beit Bridge border post on 12 May at around 06:00 when they searched the luggage belonging to a 38-year-old woman. During the search, the police found 15 bags of the drug crystal meth with an estimated street value of over R2 million. “The preliminary police investigations revealed that this woman was travelling from Harare in Zimbabwe to South Africa,” said Ngoepe.

Meanwhile, in the Roedtan policing area outside Modimolle, the police arrested a 39-year-old man for possession of counterfeit cigarettes (illegal cigarettes) while patrolling along the N11 and R33 crossroads near Rathoke weight bridge. “The police pulled-off a Toyota Rav-4 vehicle, searched it and found these cigarettes with the estimated street value of R80 000, cellphones and knives. The origin of these cigarettes will be determined by ongoing police investigations,” said Ngoepe.

The illegal cigarettes, cellphones and knives seized by the police. Photo: Limpopo SAPS.