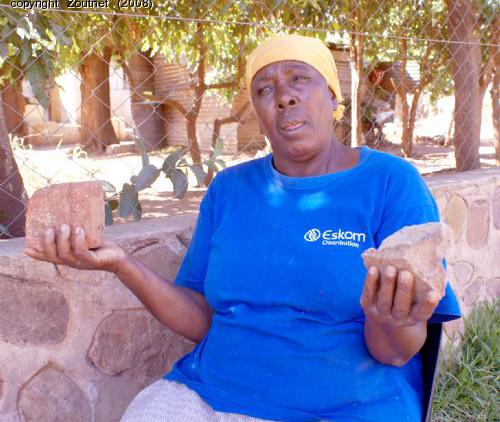 Narrow shave with death: Makhalimela shows the stones that were left at her yard. They were meant to finish her off after she was accused of witchcraft by her own community.

The baboon that has been making headlines since February this year, after women in the Nzhelele area claimed it was being used as a tokoloshe to molest them sexually, has finally been killed.

As community members were celebrating the death of this dreaded monster, a family at Vhutuwangadzebu has been left licking their wounds and many questions remain unanswered after enraged community members dumped the dead baboon at the family’s homestead, after allegedly accusing the family of owning the baboon and of witchcraft.

Granny Makwarela Makhalimela (60) of Vhutuwangadzebu narrated her ordeal at the mercy of the crowd, which bayed for her blood last week.

"It was a normal Sunday at about six in the afternoon when we heard the noise of a singing crowd that was on the road," she said. She said she did not take it seriously as she did not know what was happening. The crowd proceeded to the local traditional leader’s palace, with a dead baboon, as it later transpired.

It is alleged that the traditional leader was incensed and told them to get lost as the dead baboon could be bringing him bad luck. Makhalimela said she was surprised to see the singing crowd coming in their direction again.

"I did not suspect anything as I was relaxing with my grandchildren. The last thing I expected was that the crowd was coming to my home," she said. "They came straight to my gate and continued singing derogatory songs about me. I went to investigate, only to be met with shouts that I am the owner of the baboon and deserved to be necklaced as I am a witch, I have never been so frightened in my whole life. Just imagine staring death in the face with an unruly crowd calling for your blood, with tyres ready to necklace you," she said.

She added that what made her more scarred was the big baboon they had thrown in front of her yard and the tyres they threatened to burn her with. "To add salt to the wounds, the police, who seemed to have come with the crowd, just stood by, doing nothing to protect me. They seemed to be in cahoots with my assailants as they ignored my plea for help, "she said. "They left after a long time at my gate."

"I was left shivering with my grandchildren, not knowing what to do. This whole incident leaves me with many unanswered questions as I cannot understand why people could want me dead. I am a devout Christian who will never think of harming anybody and witchcraft is beyond my comprehension," she said. "It is only jealous people who are behind all this; they do not have any other reason of doing this to me," she added.

According to her, the baboon was killed very far away from her home and it was surprising that they came all the way to dump it at her home and claim that it was hers. "Someone with a hidden agenda is behind this and it will just be a matter of time before she is exposed and her bad intentions are known by the community. We are only surviving by prayer. Nobody will succeed in breaking this family. With God, nothing is impossible," she said.

According to her, the mere fact that she had been labeled a witch has left her with a very sore heart that will take a long time to heal. "My good name has been defiled and people will never trust me again. It is painful and it would have been better if they had killed me," she said (u tshinyiwa dzina zwi a vhavha u fhira wo tou fa, ngavhe vha tou mmbulaya khathihi).

She said the whole incident has brought much strain on the family as people stare at them with suspicion. "My grandchildren cannot enjoy their schooling as they are labeled as witches. People are no longer visiting us and a lot of strain has been put on my grown-up children, "she said. She pleaded with the community to accept that she was not in any way connected to the baboon. "I have nothing to do with this animal. This episode is driving me to insanity and I want to get over this and go on with my life, "she pleaded.

Ndivhuho Makhalimela, a son of the old woman, said they were greatly saddened by the incident. "Imagine your mother being labeled a witch, being stared at everywhere you go; it is very stressful," he said. He said they were only surviving through the support of relatives, friends and good neighbours. "What have we done to deserve all this? We are a very good family and we are not at all involved in witchcraft," he said.

Mr Takalani Munzhelele, the local civic deputy chairperson, said the matter had not been formally discussed with him. "We just hear of these rumours, but nothing formal has been brought to our attention," he said.

Munzelele said the issue of witchcraft was rampant in the villages and was a very delicate issue to deal with. "As the leadership of this community, it is our duty to unite all parties and resolve all disputes, so that we have peace in the village, "he said. He said they regarded the issue of witchcraft in a very serious light and would do everything in their power to see to it that it was resolved in an amicable way.

Not long ago, the Nzhelele area was in the news after rumours surfaced of a baboon tokoloshe which was targeting women and mostly widows and sexually molesting them on the instruction of a sangoma. In the latest incident, it is claimed the baboon was found in the possession of a golden necklace and a condom after it was killed by angry men who suspectedly could no stand the sight of it competing with them for women.

Elmon Tshikhudo started off as a photographer. He developed an interest in writing and started submitting articles to local as well as national publications. He became part of the Limpopo Mirror family in 2005 and has since been a familiar name among the newspaper's readers.