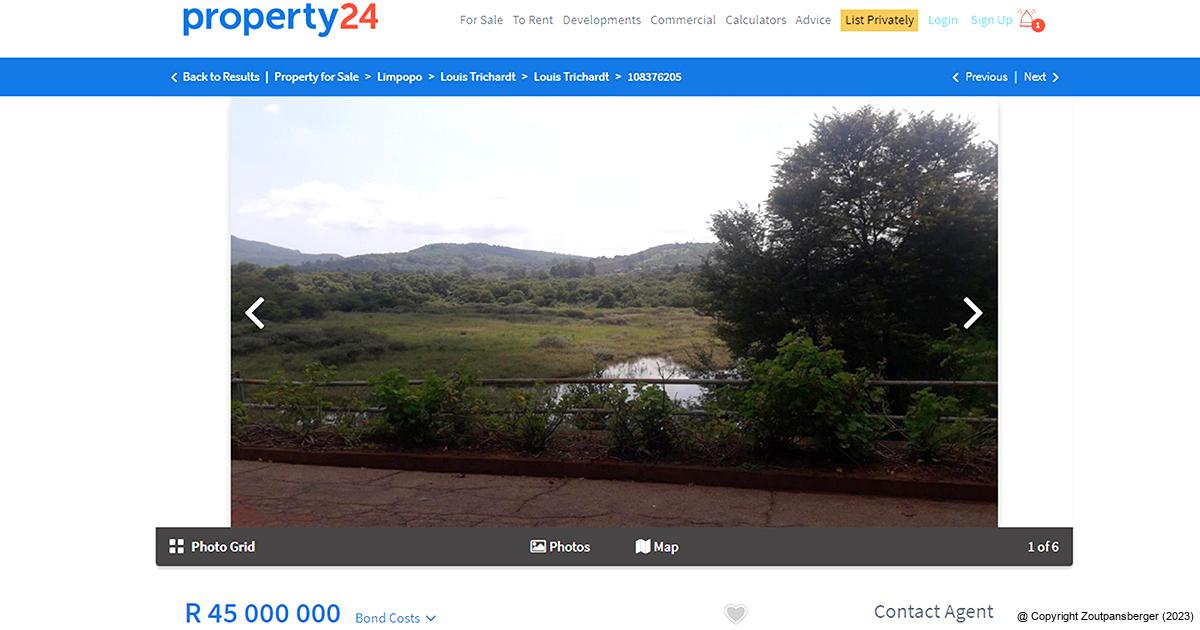 The Property24 ad advertising the property for private sale for R45 million. The area is listed as a farm earmarked for residential and business development.

Yet another twist in development tale

Yet another twist in the tale regarding the current infrastructure development taking place in Extension 9 north off Stubbs Street, Louis Trichardt, has surfaced, with a previous “developer” now claiming R150 million in damages from the Makhado Municipality for breach of contract.

Bush clearing in the area began around mid-March this year. The Makhado Municipality confirmed that this was a joint venture between themselves and the provincial department of Cooperative Governance, Human Settlements and Traditional Affairs, in accordance with the town’s existing town-planning scheme for the establishment of 179 new residential sites, five parks and streets as was Gazetted in 1984.

Some welcomed the possibility that development in the area would bring much-needed economic growth to the town, while others were left fuming, among them Mr Vino Ramjee, director of Day Break Properties 7. His unhappiness stems from a business deal gone sour since 2004.

Until 2004, nothing happened in the area as it remained part of the town’s “green belt” area. In 2004, the Makhado Municipality sold the area on public Tender 47 of 2004 to Day Break Properties 7 (DBP7), however, for a purchase price of R15,3 million. DBP7 intended to develop this area into a large shopping centre, a 150-bed hotel, and an office complex. This development never got off the ground, with DBP7 never paying for the property because of an amendment to the sales agreement that payment would only take place once the Makhado Municipality was able to deliver bulk electricity to the property boundary. In the meantime, DBP7 completed an environmental impact assessment on the area earmarked for their development, which is still valid until November 2023.

However, the Makhado Municipality, by means of their municipal spokesperson, indicated earlier this year that they were proceeding with the development since the municipality had cancelled the sales agreement with DBP7 earlier this year because it had never made any payment. The decision to cancel the agreement was taken as far back as August of 2018 during the municipality’s 136th Special Council meeting, under Item A.140.30.08.18. The resolution, among other things, reads: “That the Municipality withdraw any agreement under Tender no 47 of 2004 on development and sale of undeveloped portion of Louis Trichardt Extension 9 township.”

Ramjee, however, now claims that the Makhado Municipality had committed a breach of contract by not delivering bulk electricity to the premises as per the amended contract, which in turn had put no obligation on them to pay. Money, Ramjee said, had been no object from the start as they had guarantees in place. He also claims that, on several occasions, they had had serious investors lined up to partner in the planned development of the area, but that the municipality’s reluctance/failure to deliver services had continuously scared off these investors.

Regarding this, a letter of demand for R150 million was hand-delivered to the Makhado Municipality by M Tshingwala Attorney on behalf of Ramjee on 4 July this year. The letter specifically refers to the issue of bulk electricity. “The municipality’s failure to provide the supply of bulk electricity at the boundary of the property as aforesaid amounts to a breach of contract referred to herein. The municipality have failed to remedy the breach despite being requested to do so,” the letter states. It then goes on to give the municipality 30 days to pay the R150 million.

Amidst all of this, a link to Property24 also surfaced on social media the past weekend, indicating that the same area currently being developed by the Makhado Municipality is on the market for a private sale to the amount of R45 million. Referred to as farmland, the advertisement says the area is earmarked for residential and business development. Upon enquiry from the listing estate agent, she referred all enquiries to Mr Shanti Dosa, a former partner of Ramjee’s in the initial purchase agreement.

The Zoutpansberger contacted Dosa and asked him how someone could possibly advertise a property for sale if they were not its legal owner. Dosa said that the idea had been to attract partners to continue with the planned development of the area and that the property had been listed more than a year ago, before the current furore erupted. He said that he had already instructed the listing agent to withdraw the advertisement on Property24 and the property from the market, pending the outcome of the legal proceedings between DBP7 and the municipality. Ramjee, in turn, said he did not know anything about the property’s being advertised on Property24.

Questions about the letter of demand were sent to the Makhado Municipality last week. Although the municipality acknowledged receipt of these and made a commitment to respond, they had yet to do so at the time of our going to press.