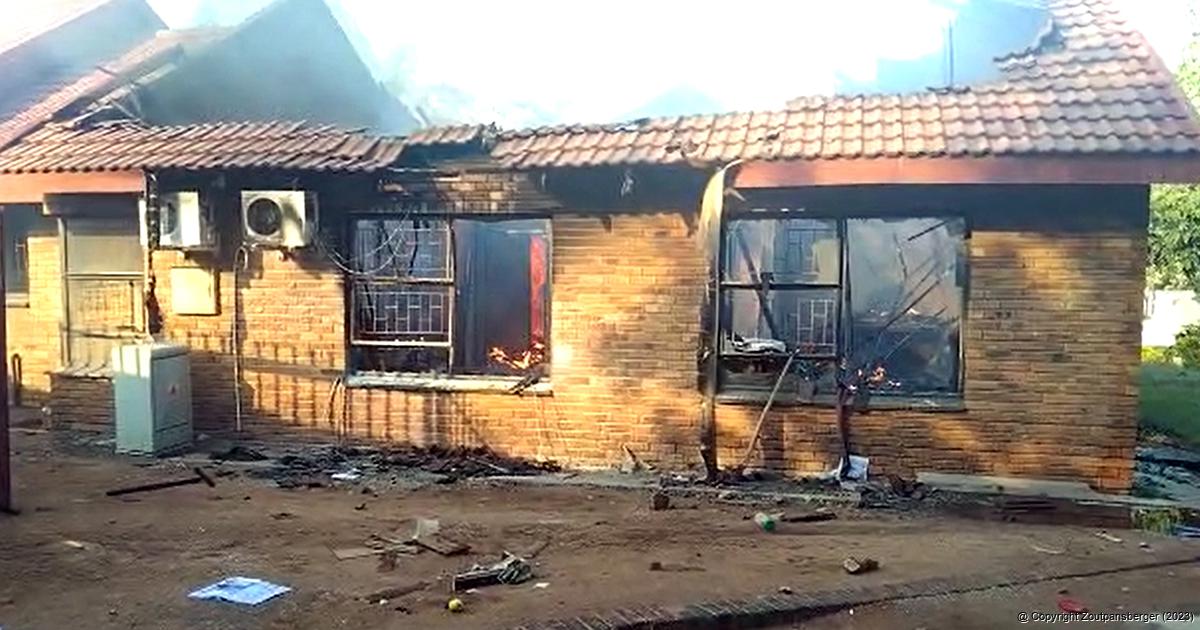 This municipal building that were torched on Monday in Nancefield. Images supplied.

Government has another lesson to learn regarding the violent protests in the border town of Musina the past week in reaction to poor service delivery. This time, the constant dry taps sparked the unrest, with the Vhembe District Municipality (VDM) singled out as the culprit.

The situation in Musina became increasingly intense from Tuesday, 10 May, when residents first took to the streets, burning tyres and barricading streets, in protest against the town’s chronic water shortages. In response, the Vhembe District Municipality issued a statement on 11 May, stating that they were trying to restore the water supply to the town. Also on 11 May, Musina Mayor Godfrey Mawela addressed residents, calling for calm.

Violence flared up again, however, on Thursday 12 May, and the police had to call in reinforcements to contain the situation. Carnage followed, with municipal infrastructure being damaged, vehicles being stoned or torched, and shops being looted. One unconfirmed report indicated that one person had died after being shot during the protests. Who had shot him and where could not be confirmed. To curb the surge in violence, the police had to use rubber bullets to disperse the protesting crowds and try and restore calm.

On Friday, the Limpopo police issued a statement announcing that they had arrested four suspects on charges of public violence, arson and malicious damage to property, following the violent protest action. They also stated that the police would remain in the area as the situation remained volatile. In the meantime, provincial police commissioner Lieutenant General Thembi Hadebe urged the public to raise their concerns peacefully and desist from resorting to violence. “Blocking roads, looting businesses and damaging properties are serious offences and police will not hesitate to act against the perpetrators,” said Hadebe.

As the weekend progressed, sporadic scenes of public violence were reported, and on Sunday, the police released another statement, stating that an additional five suspects had been arrested for public violence, arson, and malicious damage to property. These arrests brought the total number of suspects arrested to nine.

On Monday, the situation in Musina took a turn for the worse once more. Reports indicated that a 16-year-old pupil was allegedly hit in the eye by a rubber bullet after the police had fired on protesting crowds. He was, apparently, on his way to visit his father, who works at the municipal offices in Nancefield. This infuriated residents, which later led to the municipal office in Nancefield being torched and basically burnt to the ground on the same day.

At the time of our going to press, the situation in Musina was calm but tense. Several residents the newspaper spoke to indicated that they feared that the violence could flare up again at any time and spill over into Musina’s CBD and residential areas. Numerous residents also expressed their extreme dismay with the criminal elements within their society who decided to “cash in” on the protest action by looting shops. Several voice notes also circulated on social media of persons calling for more violence and the looting of shops. Rumours also abounded that the continued “call” for more violence was being fuelled by forces within opposing political factions as part of the political infighting within the Musina Municipality.

As for the VDM’s plan to address the service delivery protest in Musina, they issued a statement on Tuesday, stating that water was being supplied to Musina residents at that stage, except for Extension 14, which still had no water because of the low volume of water.

“Vhembe District Municipality will drill six boreholes, while Venetia Mine will also drill an additional four. In total, it will be 10 more boreholes,” said VDM spokesperson Mr Matodzi Ralushai in the statement. He added that the contractor was on site and two boreholes had already been drilled. All that was left to do was to equip and electrify the boreholes to augment the water supply. Ralushai said that the town’s water supply would be switched off again at some stage to fill up the reservoirs.

“We further humbly request residents to work together with our municipalities and Venetia mine in order to reach our common goal of supplying water to all areas,” Ralushai said.