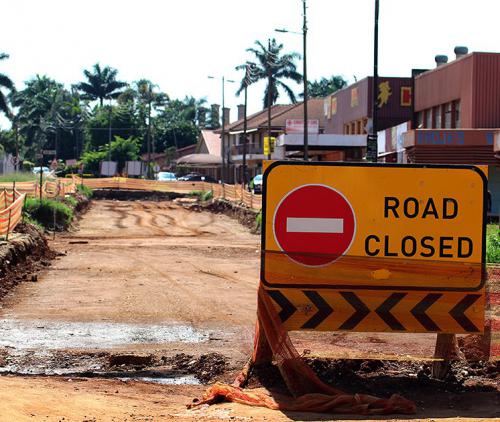 The section of Main Street between Commercial Street and 1st Avenue was ripped up in September last year and completely closed off for traffic. What immediately irritated residents, and especially business owners adjacent to the road, was that the municipalityhad  only sent them letters explaining their intentions weeks later.

Frustration is mounting among residents of Eltivillas in Louis Trichardt about the snail’s pace at which the rehabilitation of a section of Main Street, the main traffic artery leading in and out of this busy suburb, is taking place.

The section of Main Street between Commercial Street and 1st Avenue was ripped up in September last year and completely closed off for traffic. What immediately irritated residents, and especially business owners adjacent to the road, was that the municipality only sent them letters explaining their intentions weeks later. “What purpose did that serve, informing us that they were going to rip up the road after they had already done it!?” was the view expressed by all affected by the road closure. They added that the road closure could not have come at a worse time as many of them are still struggling to keep head above water because of the Covid-19 lockdown restrictions of the past months.

“It is terrible! There was no notification. They circulated a letter in November that they wanted us to sign that we were notified. This was one of the busiest periods of the year to try and recover from the negative impact of the Covid-19 pandemic. Because of the road closure, I suffered tremendous losses, with a 65% drop in sales for December,” said Ms Masana Maluleke, owner of ChemiMed Pharmacy in Main Street.

To make matters worse, Maluleke said, her sales were continuing to decline. Almost 90% of her clients are “walk-in” clients. “If people get there and see the road is closed, they make a U-turn and go somewhere else,” said Maluleke. She is also upset about the pace at which construction work is taking place. “They don’t work on weekends. They closed on 15 December and only reopened on 9 December. From a business perspective, honestly, they could have put back the road even if it was a gravel road,” said Maluleke.

Maluleke added that, apart from the bad timing, the lack of communication on the part of the municipality was seriously frustrating. She said they as business owners should have been consulted. “They could have called us together and we would have asked them to at least let the festive season pass. They could have chosen a quieter time,” said Maluleke. She also added that the start of the rainy season was the worst time to start a project like this and that they should have waited until winter. “That is what we would have suggested. The project should also have been done in sections,” said Maluleke, explaining that they could have first closed of Main Street between Orient Road and 1st Avenue, and then between Orient Street and Commercial Street. This would have allowed at least one intersection on Main Street to be open all the time. “You cannot just dig up the whole road, so that there is no way in or no way out. It must be done in a way that we can still function. At the end of the day, we want a better road, but if there is no business left, what is the point of a new road?” said Maluleke.

Maluleke said her business had taken a huge knock with the municipality’s one-sided decision to close the road. “It was not something I anticipated … If the situation goes on for another four months, it means that I will have to shut down because there is no way I will be able to pay the bills ... and remember, I do not work here by myself. I have got people working for me who support their families. They have kids in school. This thing is affecting a whole lot of people,” said Maluleke. Having said this, Maluleke also questioned the decision to complete rebuild the road as it had not been in that bad a shape to begin with.

Although he also wondered why digging up the whole of Main Street had been necessary, Mr Vishal Ghelani of Khoja’s Modern Store was much more pragmatic about the current state of affairs. “For me, personally, the road works are not that much of an inconvenience. Our car parks are at the back of the shop, and we have access from Orient Street. For our customers, however, it is a major problem getting to the store and it is also a hindrance for the taxi people,” said Ghelani.

As for loss of income, Ghelani said that this was difficult to judge. “We had a fairly decent December. People who wanted to come and shop made the effort to do so. But now is the time that people say ‘Leave it for next month. It is not that busy’. Then it makes a difference,” said Vishal. Regarding this, Vishal also expressed the hope that the project will be completed sooner rather than later. “Some business owners in the street are experiencing difficulties and are all affected to a certain extent. But at least we are happy that the road is getting fixed. Timing wise, the remaining project period is our biggest concern,” said Ghelani.

Another business owner who is not really affected directly by the closure of Main Street is Mr Bobby Rasool from Cycle Centre. His frustration with the project is more in terms of getting in and out of the Eltivillas residential area. Before the road closure, getting from their home to their shop took them less than three minutes. “To get to work, we now have to take a detour along the Vondeling road, past the SPCA, on to the N1. The N1/Main Road junction being such a nightmare to navigate, we take the R524 to Levubu and double back behind Makhado Crossing to get to our shop. It is the same getting home. Not only does it take a lot more time, it is also extra fuel cost,” said Rasool. Having said this, Rasool said that they were glad that something was finally being done to Main Road and, hopefully, the notorious Main Road/N1-junction. “They must just get going and get it done!” said Rasool.

In response to these complaints and other questions, Makhado Municipality’s spokesperson, Mr Louis Bobodi, responded on Wednesday by saying that the municipality was in continuous communication with residents of Eltivillas through the Community Liaison Officer and the Project Steering Committee that had been appointed for this specific project. “The municipality has also appointed a social facilitator to ensure effective communication throughout the duration of the project,” said Bobodi. This clearly contradicts what residents and business owners are saying.

Bobodi explained that the Main Street project entails the reconstruction of the intersection of the Main Street junction with the N1, including about 340m of upgrading of the street. The Main Street project will consist of two surfaces - an asphalt surface and concrete paving. The pavement layers will be rebuilt, and stormwater drainage will be improved. Other streets affected by the project are Orient, Commercial, 1st Avenue and 1st Street. The project duration is six months and the contract value R9,9 million. The contractor is Chauke Business Enterprise. Bobodi added that the project is currently being delayed by “abnormal rainfall, limitation to construct the street in sections instead of the full length due to consideration of the negative impact on businesses and to reduce the inconvenience to residents, and poor underlying ground of the existing road, which needs to be removed to improve the foundation of the new road.” If all goes according to plan, Bobodi said, the road is scheduled to reopen in May this year. “Circumstances permitting, of course,” said Bobodi.

Regarding the rehabilitation of two other streets in Louis Trichardt, Kameel and Alwyn Street, Bobodi had yet to respond to media questions about the delay in the completion of these projects, some of which have been outstanding since November last year. A visit to these two street on Wednesday did confirm some activity on site, with workers starting to replace the pavement curbs.