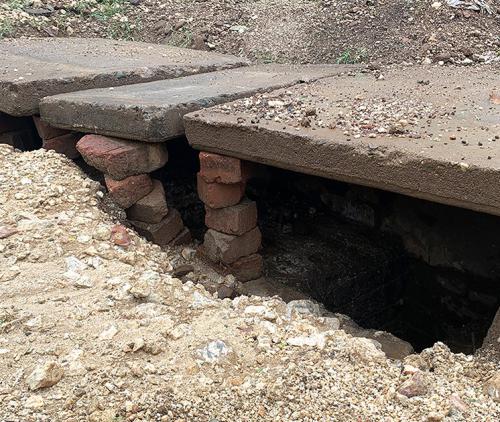 The contractors’ haphazard response to the open drainage pits - precariously balancing concrete slabs on loose bricks to cover the pits.

The Makhado Municipality have yet to answer follow-up questions regarding the rehabilitation of Kameel and Alwyn Street in Louis Trichardt.

From the start of the project, awarded under Tender 49/2021 to Tshedza Consulting Engineers CC, with Luzuko Trading Enterprise CC appointed as contractor, raised some eyebrows. Workers wasted no time in stripping away the original surfaces of these streets, but construction activities have seemingly come to a complete standstill.

The Zoutpansberger reported on the project at the beginning of November this year, voicing the concern of local environmentalists, who questioned the way in which the project was being implemented and the impact it would have on the local environment. This included problems regarding the placement of the project’s industrial site office in a park earmarked for recreational purposes in Tshirululuni Street; whether a water-use license had been obtained for using the municipal borehole located in the same park for construction purposes; and, most importantly, the dumping of building rubble in protected watercourse areas and natural tributaries.

In reaction to these questions, the Makhado Municipality’s answers were fairly vague, merely stating that they did not foresee any negative impact from the project and that the contractor was dumping the building rubble in an area designated to them.

The questions the municipality did not answer were about the contract value and why undertaking such a major project at the start of the rainy season was necessary. After weeks of trying to get a response from the municipality, these questions remain unanswered. The recent good rains are exactly the reason why the project seems to be standing still now, again begging the afore-mentioned question. Another concern by residents was the fact that the untarred streets would cause major blockages to the existing stormwater drainage systems in these street, as mud and rock now freely washes into the system. This has also started to happen now. Again, no response was received from the municipality.

At the time of our going to press, the newspaper was still waiting for a response regarding the state and progress of the project from municipal spokesperson Mr Louis Bobodi. Chances are very good that construction work will not resume soon, especially if the rain keeps coming down.