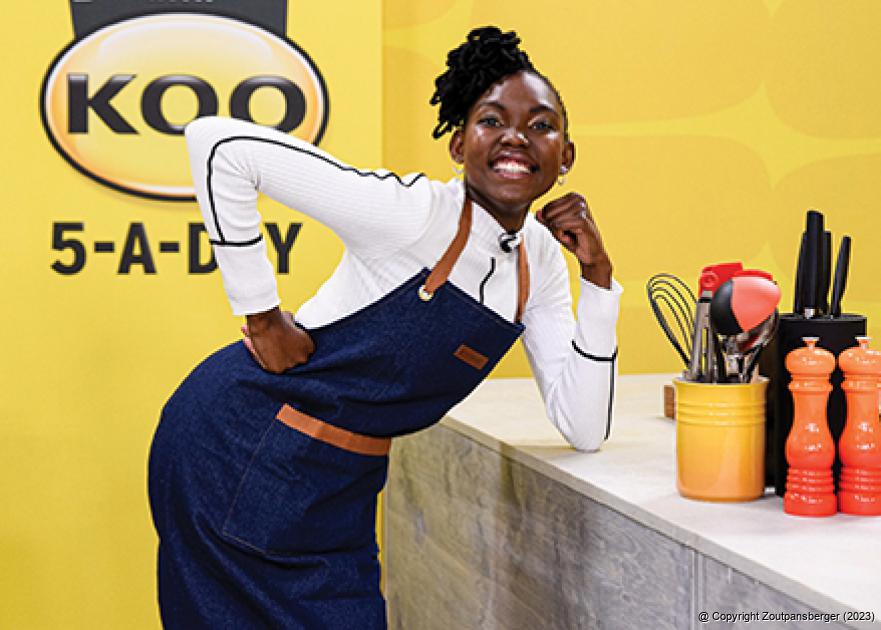 Blessing Semenya at the Colour your plate with Koo cooking show in Cape Town in July of this year. Photo supplied.

A Grade 12 learner at Louis Trichardt High School, Blessing Semenya (19), was one of the contestants in the Koo cooking show Colour your plate with Koo that took place in July this year in Cape Town.

Since Koo is such a big brand, Miss Semenya did not think much about it when she entered the competition or that, out of everyone in South Africa, they would actually choose her. Semenya is not a stranger to Koo either because, at the age of 13, she took part in a Koo cooking competition with her mother as well. Other than that, plus what she had been teaching herself and learning in her hospitality studies classes, she has not had much experience in the kitchen.

A phone call and a range of general questions from SABC in early July did not mean she would part of the show, but this definitely got the butterflies in her going as the excitement kicked in. After a few days, she received a phone call from Koo themselves and they informed her that she would be one of the contestants on the show.

On 22 July, Koo sent a shuttle to pick up Semenya at her house and take her to Hoedspruit, where she got on a plane and flew to Cape Town. On 23 July, the shooting of the episode took place at the Express Partners studio, with all the contestants, resident judges and guest judges present. With the episode being shot in July, Semenya is now looking forward to seeing herself on television and hearing what people have to say. “It’s driving and thrilling to know something is about to happen, and you can’t stop the butterfly feeling.”

Semenya has already been getting a lot of attention from family, friends, classmates and even strangers, who repost, tag and comment on social-media platforms. She did a lot more than cook in Cape Town. She appeared on television and got to meet her role model and mentor. Basetsana Kumalo, 1994’s Miss South Africa, is one Semenya’s biggest role models as she herself is pursuing a career in modelling. She had the chance to speak to Kumalo face to face and ask for advice. Getting the opportunity to speak to a former pageant queen, with Semenya only starting out in the industry, helped her grow.

Semenya had other encounters with celebrities such as the well-known chef Ruben Riffle, who gave her a boost of confidence by telling her she had a very bubbly personality and that he loved what she had done in the kitchen. What she learned from the chefs and the judges was more important to her than her first trip to Cape Town, traveling on a plane, the prizes, staying at a hotel for free and even the competition itself. She simply regards this as a learning curve, and not only did she learn things about these celebrities but something about herself as well; her perspective has changed completely.