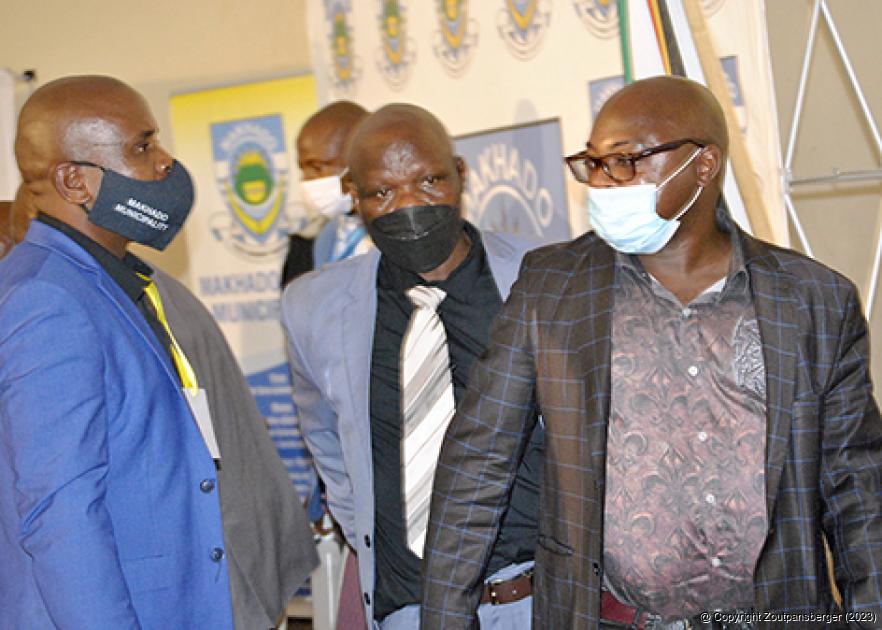 The acting municipal manager, Kent Nemaname (right), was escorted from the hall after the meeting adjourned for a few hours. Photo: Kaizer Nengovhela.

The election of a new mayor for the Makhado Municipality was delayed for several hours on Tuesday while the infighting among the local ANC factions continued. Apparently only after strict instructions were issued from the ANC’s provincial and national executive was the former mayor, Samuel Munyai, re-elected.

The tension that erupted on Tuesday can be traced back to long-standing differences between primarily two ANC groups in Vhembe. The one group of ANC members support Advocate Makonde Mathivha, while the other group support the current deputy chairperson of the ANC in the region and executive mayor of Vhembe, Dowelani Nenguda.

The first meeting to discuss the names of the mayoral candidates took place on Sunday, 7 November, in Thohoyandou. Some ANC members, however, voiced their dissatisfaction and accused the current ANC chairperson in the region, Tshitereke Matibe, of taking sides and submitting the list to the ANC provincial executive without the necessary consultation. The aggrieved members staged a march to the ANC’s provincial offices in Polokwane on 8 November and then went to Tshwane to complain to the ANC’s national office on 12 November.

The ANC’s provincial and national structures, however, vetoed this proposal and insisted that the municipality’s former mayor, Samuel Munyai, stay on in the position while an investigation continued into the suitability of Mukwevho as mayor.

On Sunday (21st), the NEC had a meeting during which the criteria for mayoral candidates were again spelled out. What was emphasised was that candidates must be “capable, committed and experienced”. Although this fact was not specified, mayoral candidates must preferably have a post-matric qualification, as candidates are expected to have an “understanding of municipal finances, administrative capability, the regulatory environment of local government”. Candidates may also not have a criminal record or pending corruption charges.

The NEC’s instruction did not go down well with several local ANC councillors, who felt that Mukwevho was the suitable candidate.

During Tuesday’s meeting, Cllr Samson Baloyi stood up and proposed that the meeting be adjourned for 30 minutes to allow the ANC members to meet in private and discuss the nomination process. When Mr Kent Nemaname, the municipality’s acting manager and chairperson at the meeting, wanted to proceed with the voting process, the meeting was disrupted. Baloyi took the microphone and announced that the meeting was called off.

The ANC leadership in the province then had to step in and calm down the situation. The ANC members were instructed to return to the hall and finalise the election of office bearers. From what could be gathered, a number of phone calls from the top and some harsh words were needed to convince the groups to put their differences aside and elect the new leaders.

The representative of the Economic Freedom Fighters (EFF), Cllr Tshilidzi Maraga, criticised the ANC afterwards and said that they must finalise their nomination process before arriving at a council meeting. “This is not an ANC meeting, but a council meeting,” she said. Maraga said she was also disappointed by the way ANC members had taken control of the meeting and instructed the chairperson to do what they wanted to do.

The representative of the Democratic Alliance (DA), Cllr Pierre Smalle, also expressed his disappointment with the actions of the ANC members who were only interested in fighting for positions in the council meeting. He said that if political parties could not even reach consensus on who the leaders should be, this showed bad leadership.

In an interview with the SABC afterwards, the provincial ANC spokesperson, Donald Selamolela, said that the matter would be resolved. He ascribed the tension to a “misunderstanding and misinterpretation of the ANC resolution”. He told the SABC that where complaints about mayoral candidates were received, the ANC would retain the former mayors for the moment.

Samuel Munyai was duly re-elected as mayor, with Cllr Dorcus Mboyi as Speaker. The duties of Chief Whip will be performed by Samson Baloyi.

In his acceptance speech, Munyai said that he was extremely honoured to have been elected mayor and that he gladly accepted the responsibilities entrusted to him. “I am full of expectations and, at the same time, serene and aware of the responsibilities I assume. I am boundlessly grateful to the ANC for empowering me by giving me the responsibility to make the daily life of Makhado people better,” he said.

He said that Makhado Municipality required many improvements and mentioned the bad roads, unemployment, provision of clean water and electricity and general service delivery. Munyai said that everything must be done to fight poverty and the implementing of projects should be used to create jobs for poor communities.