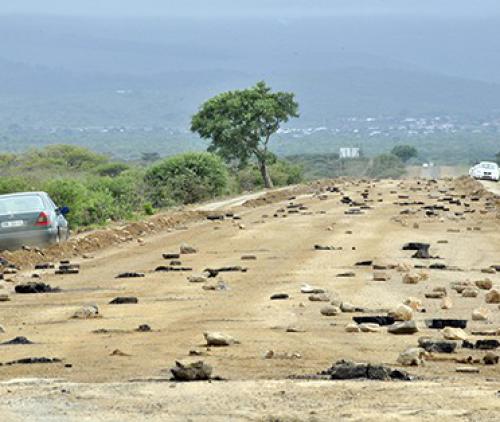 The Directorate for Priority Crime Investigation (Hawks) have confirmed that they are investigating the circumstances around the construction of the D959 road leading from Louis Trichardt to the Makhado Air Force Base. The road started to disintegrate within weeks after supposedly being upgraded and resurfaced.

The road is currently an enormous frustration for thousands of commuters who travel to and from town every day. Last week, the bits of tar left on the road were ripped up again while construction work seeming to resume.

In October this year, the Limpopo MEC for Public Works, Mr Dickson Masemola, visited the area to check on the progress of the D3715 road leading past Kutama. He announced that a further R30 million had been earmarked to revamp this road. The MEC then also checked on the progress of the D959 road. What he found was yet another monument to either incompetence or corruption.

Masemola was outraged to find that the D959 road, on which another R8 million had been spent, was literally falling to pieces, only a few months after the project was supposed to be completed. This rehabilitated road had, among other things, developed what is referred to as ‘crocodile skin’, which resembles cracks in the road surface around a pothole. These cracks usually indicate signs of a deeper underlying problem, such as water underneath the surface.

“The contractor did shoddy work,” Masemola said, adding that he viewed the poor quality of the road in a serious light and had referred the matter to both the Special Investigating Unit (SIU) and the Directorate for Priority Crime Investigation (Hawks) to investigate. He said that the contractor would face dire consequences, should investigations find any dishonest dealings regarding the project.

The contractor, Makasana Construction, who is in a joint venture with Vashumi, was ordered back to the road and on Saturday (20th) started to remove the layer of tar with a grader. Motorists had to use alternative roads again while construction continued. Earlier this week, heavy rain fell over the area, causing vehicles and buses to become trapped in the mud. This caused many commuters to arrive late at their places of work once again.

Residents of the area have raised their serious concerns about the shoddy work delivered by Makasana Construction. “Who is now to blame for the poor condition of our newly ‘upgraded’ road?” they wanted to know.

The chairperson of the Zoutpansberg Community Development Forum (ZCDF), Mr Patrick Sikhutshi, said that he was on record in reaching out to the department to offer advice on how this road rehabilitation should unfold to ensure a good-quality product. “Unfortunately, MEC Masemola and his management believed otherwise and have landed us in this sorry state of affair. They must take responsibility for this mess,” he said.

Sikhutshi said that for this to happen just before the festive season, a time when the road is very busy, was very unfortunate. He said that ZCDF remained convinced that this fiasco could have been prevented. “Now we remain with more questions than answers. Even now, when they are redoing the road, no explanation is given to the community,” said Sikhutshi.

Sikhutshi said that the MEC and engineers had initially assured the community that the road would last for years to come. “This lasted for only a month,” he said. The ZCDF now demands that the department fully disclose the details surrounding the project, as well as why payment certificates were issued. “We call for an investigation … and surely the heads must roll,” he said.

The newspaper tried on numerous occasions to contact the contractor, Makasana Construction, and Vashumi. The phone lines were not answered.

The spokesperson for the Hawks, Capt Matimba Maluleke, said a case had been opened with the Hawks and they were still investigating.