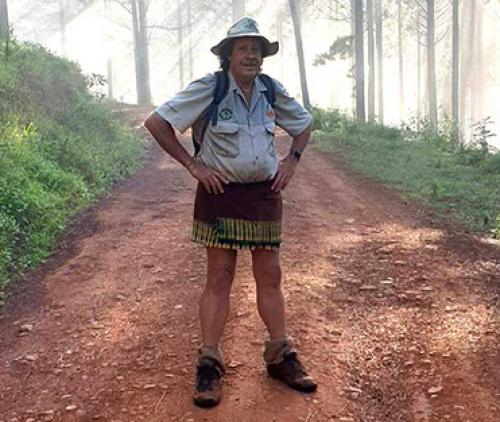 Dave van Graan is heading to Namibia again for his next 800km walkabout, from the Epupa Falls to Henties Bay, to raise awareness for Desert Lion Conservation. Photo: Facebook.

Dave on his way to next Namib adventure

Dave van Graan needs no introduction locally, but for those who do not know whom we are referring to – that guy who takes to the road every now and again in his "kilt" and hat, dragging his overloaded, self-improvised two-wheel cart for miles and sleeping next to the road? That is Dave. And no, he is not a homeless man, as a few have (whisperingly) referred to him in passing during his expeditions.

Dave is in fact one of Louis Trichardt’s best-kept (and treasured) secrets – a legend in more than one regard. He is a highly experienced tour guide by profession and his astonishing knowledge about nature has earned him great popularity among both local and international clients. When he is not busy entertaining tourists from his Land Cruiser somewhere in wild Africa or some other continent, or walking great distances to raise awareness for this or that important cause (which usually involves animals) that lies close to his heart, he runs his own bar and nursery from his place up in the mountain. He admits that he has never been one for staying put in one place for too long at a time as he was forced to do along with the rest of us these past months since the outbreak of Covid-19.

Nothing makes Dave happier than to breathe in nature’s own fresh scents and to fall asleep underneath the wide-open African skies. Each expedition, he says, is a unique experience in itself. “Of course, there are often long stretches through my journeys that can sometimes become a little monotonous, but I always encounter some or other hilarious or interesting situation along the way, and that is what makes it all so worth it,” he says with a gleam in his eyes. Speaking to him about it, one can actually feel the stirring anticipation and excitement of his coming adventure.

Dave turned 64 in September this year, and although he admits that getting older has its days, he has never been fazed about something as trivial as age, which certainly has never stopped him from doing what he loves. He can still show the younger males of our species a thing or two about determination and courage. Talking the talk is easy, but to walk the walk too is quite another thing. To plan an on-foot excursion of 800km through the wild and see it through without getting cold feet takes a lot of guts.

Dave is on his way to Namibia again for his next project as we speak – the Bart Mobile “Mark 2” (as he calls his cart) groomed, oiled and ready for the long road ahead. This time, he is walking in support of Desert Lion Conservation. The plan is to kick off the 800km journey on Sunday, 21 November, starting at the Epupa Falls in Kaokoland. From there on, he will walk south, past Palmwag to Torra Bay, and on to complete the journey at Henties Bay.

He wishes to thank PHOENIX (the main sponsor) for lending their financial support and making this project possible, and Leach Printers for sponsoring the banners.