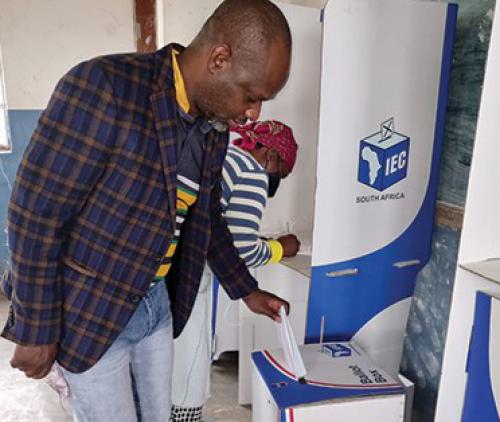 Much of the sameness?

Whereas the municipal elections in parts of South Africa caused some major upsets, the situation in Vhembe appears to be much the same as during previous elections. At the time of our going to print, the results in a many wards were still outstanding, with only 56% of the province’s votes counted. Based on the preliminary results, the ANC might get close to the 68% of the support the party received in the 2016 elections.

Monday’s municipal elections proceeded without many glitches, albeit slowly at some polling stations. The IEC reportedly experienced problems with its Voter Management Devices (VMD). In Louis Trichardt, voters complained that their names did not appear on some of the lists, even though they had registered. Political party representatives as well as IEC officials, however, assisted in directing them to the relevant voting stations. In one such case, a husband and wife who share the same address had to vote at different polling stations, without any explanation for why this would be the case.

Not all political party representatives were happy with the process. An independent candidate standing in Thulamela Municipality’s Ward 27, Phathutshedzo Ramabulana Mukhaninga, reckoned that the IEC officials were biased. “We (independent candidates) feel that the elections were not free and fair, simply because IEC officials were assisting people to vote in favour of the ANC,” he said. He said that ANC candidates were actively campaigning inside the voting stations in several wards.

His scepticism about the influence of IEC officials was shared by the PAC leader in Vhembe, Steven Maluleke. He reckoned in many cases the IEC officials were unashamedly part of the ANC’s “election machinery” and did not try to remain neutral.

Maluleke was not, however, completely dissatisfied with the results of the election. “We are quite happy with our performance, considering that we used to have two seats in the Vhembe District Municipality, and now the data at hand indicates that we will have six seats,” he said.

The ANC’s spokesperson in the Vhembe region, Mr Tshifhiwa Dali, said that ANC was pleased with its performance in the four local municipalities. “Out of a total of 127 wards, we have won 125,” he said. Dali said the ANC had claimed back one ward in the Vuwani area that had previously been under the control of an independent candidate. “Our primary task is to fast-track service delivery,” he said.

By midday Wednesday, the Economic Freedom Fighters (EFF) seemed almost certain to become the official opposition in Vhembe. The EFF’s spokesperson in Vhembe, Mr Dunani Baloyi, said that they had contested the elections at all 127 branches. He attributed the low voter turnout to a loss of trust in the ANC and said that many of the EFF’s supporters could not vote on election day. He believes that the IEC should put more effort into voter education.

Baloyi was, however, optimistic about the future. “In years to come, these four municipalities will not be run by one organisation,” he predicted. He said that a better party representation would lead to better service delivery.

The spokesperson for the Democratic Alliance (DA) in Vhembe, Ms Desiree Van Der Walt, said that it was a bit early to comment, as not enough results were available to make comparisons. She was, however, satisfied with the DA candidates’ efforts prior to and during the election process.

Van der Walt said that a lot of effort had gone into the DA’s campaign, and once the lockdown restrictions had been lifted, they had gone all out to tell voters why looking at the track records of political parties was necessary. She said that whatever the outcome of the elections might be the DA representatives would be working hard for the benefit of the people. “We will be monitoring and be an excellent opposition, where we are an opposition, and we will leave no stone unturned to make sure that whatever is wrong will be brought to light,” she said.

The spokesperson for the Able Leadership (AL) party, Mr Lucas Magadagela, said that they were reasonably satisfied with their performance, considering that the party was less than eight months old. He was confident that the AL would secure at least one seat in the Vhembe District Municipality. “We would have performed much better if those young people were not turned back in large numbers from voting stations. They were not given a chance to vote,” he said.

Magadagela also expressed his concern over the biased attitude of the IEC officials. He complained about voters’ being transported to voting stations by IEC officials, but being told en route to vote for the ANC or be targeted afterwards. He also criticised the involvement of the tribal authorities. He mentioned a situation at Ha-Matsila where people were allegedly summoned to the chief’s kraal and coerced into voting for the ruling party. “That is completely out. Democracy allows people to be individuals,” he said and condemned instances where voters were given regalia and influenced not to vote freely.