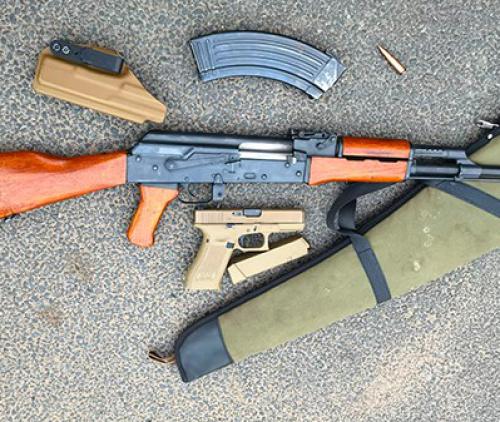 Two of the six illegal firearms recovered by the Limpopo police in their week-long joint operations throughout the province. Photo: Limpopo SAPS.

The police in Limpopo have managed to round up 1 316 suspects between 17 and 24 October for various offences, ranging from murder, robbery, rape, sexual assault, theft of a motor vehicle, stock theft, possession and dealing in drugs to the possession of unlicensed firearms and ammunition. A total of 231 suspects were arrested for contravention of the Illegal Immigration Act.

Provincial police spokesperson Brigadier Motlafela Mojapelo said in a statement that two suspects sought for serious cases of murder and rape had been arrested on 22 October. The suspects were arrested by members of the Vhembe Highway Patrol, the Thohoyandou Tactical Response Team (TRT) and Crime Prevention. A 38-year-old suspect was arrested at Mbilwi village in connection with the murder of a 23-year-old foreign national, Talend Gwangwaza, at a shopping complex in Sibasa on 21 October. The victim was found lying in a pool of blood with stab wounds. The other suspect, also aged 23, was arrested for a rape that occurred in Gondeni village.

On Monday, 17 October, members of the Highway Patrol received a complaint about a truck delivering groceries to Jane Furse that was hijacked on the R33 road. “They swiftly responded, and, with assistance of the Tracker company, the truck was traced to a store in Tafelkop, Botlopunya village. Police searched the premises and recovered all the stolen groceries worth over R200 000. The owner of the shop, aged 36, the driver of the truck (33) and the other suspect (27) were all arrested,” said Mojapelo.

Members of the Highway Patrol also arrested a 41-year-old suspect at Machakaneng village in the Sekhukhune District after he was caught driving a suspected stolen motor vehicle. “The members were busy with their normal patrol duties when they noticed a speeding VW Golf 5. After the vehicle was stopped and thorough investigation conducted, it was discovered that it was reported stolen at Wierdabrug in Gauteng Province,” said Mojapelo.

Another vehicle reported stolen in Etwatwa, Gauteng, was also recovered in the Makhado policing area in the Vhembe District by members of the Highway Patrol and Flying Squad. “The vehicle, a Toyota Hilux, was spotted on the N1 south road and police immediately gave chase. The 32-year-old driver was arrested for possession of a suspected stolen motor vehicle,” said Mojapelo.

During the week-long operations, police managed to recover five illegal firearms, six robbed/stolen vehicles, a number of dangerous weapons, stolen property such as electrical appliances, clothes, cellphones and groceries, liquor, illegal cigarettes, and various drugs, including cocaine, crystal meth and Mandrax. Provincial police commissioner Lieutenant General Thembi Hadebe applauded the members for their endless efforts in fighting crime across the province and the continuous support of the community.