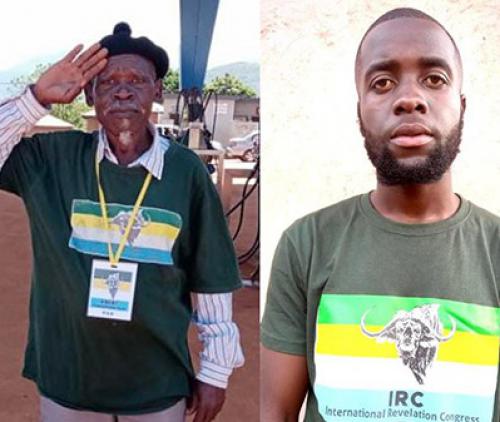 The oldest candidate in the Vhembe area is the 79-year-old Tshinyadzo David Manyatshe (left), who stands as candidate for the International Revelation Congress (IRC). Emmanuel Mahata (right) is one of six 21-year-old candidates who are hoping to get elected. Mahata is an IRC candidate in Makhado's Ward 31.

Lots of hopefuls vie for voters' crosses on 1 November

The average age of candidates in the Vhembe District hoping to be elected during the coming municipal elections is surprisingly high, coming in at 43. Quite a few “70-plussers” are also on the list of hopefuls.

The lists of candidates in the four Vhembe municipalities as well as the district municipality make for interesting reading. Voters clearly cannot complain about not having options. Whether all the candidates are worthy of a vote is obviously another question.

Based on a scan through the lists, 1 555 candidates will vie for positions in the four local municipalities as well as for the Vhembe District Municipality. The major political parties all have a presence, and in the most hotly contested municipality, Collins Chabane, no fewer than 22 parties have submitted names of candidates for proportional representation.

The age diversity, however, is interesting. No fewer than six 21-year-olds can be found, with 12 candidates being 70 years or older. The oldest candidate is the 79-year-old Tshinyadzo David Manyatshe, who stands as candidate for the International Revelation Congress (IRC) in Makhado’s Ward 29.

He is confident that his age will count in his favour in securing the votes of other senior citizens. “Senior citizens have voted for the ANC because they want grants. That grant does not belong to the ANC, it belongs to the State. Even if we remove the ANC, the grant will remain,” he said.

The IRC also has a 21-year-old candidate on its Makhado list. Emmanuel Mahata is hoping to secure the Ward-31 seat, an area that includes Mashau, Thondoni, Valdezia, Mambedi and Mahamu. To him, the biggest challenge is unemployment. “As a youth, I want to help other young people like me. I want to bring service to the people, and people must not look at my age and judge me. I am capable of doing more, as young as I am,” he said.

In general, voters have a wide variety of candidates and political parties to choose from. No fewer than 49 independent candidates will also try and secure crosses from voters. The IEC lists unfortunately do not distinguish in terms of gender, which makes judging the number of male and female candidates difficult.

The Economic Freedom Fighters (EFF) have only submitted the name of one candidate on the proportional representation (PR) list in each of the municipalities. The PR candidates are allocated according to a formula that calculates the total support a political party obtains during the election in each municipality.

When the EFF’s Makhado councillor, Anthony Mathumba, was asked about this, he explained that the IEC allowed them to submit only one name for now. After the election results are made available, the EFF will submit more names. The reason for this is to ensure a gender balance, Mathumba said. If, for instance three men were selected as ward councillors, the names of three women would be submitted to serve as PR councillors.

The Collins Chabane municipality, which covers the often-volatile Vuwani District, may turn out to be the place where the ANC will battle most to hold on to their 84% majority obtained during the 2016 elections. No fewer than 489 candidates are vying for votes, which include 15 independent candidates.

Starting in alphabetical order, the political parties include the Able Leadership, who submitted names of 56 candidates. Their number one PR candidate is Tinyiko Khosa. The ACDP also believes it will do very well in the Vhembe region. This party has submitted 26 names in Collins Chabane, with Khombo Mabasa being first on the PR list.

The ANC has forwarded 87 names, with Miyelani Gladstone Chauke leading the pack. Koto Robert Muthubi is first on the African People’s Convention’s list, while Cope places its hope on Thato Ndobe. The Decent Political Party has selected Hasani Simon Sithole as the number one PR candidate, while the DA backs Samson Muavha.

The EFF’s solitary name on the PR list is Dunisani Lyborn Baloyi, while the Gaza Movement for Change backs Vusiwana Mtileni. The Gazankulu Liberation Congress pins its hopes on Justice Maluleke. Very interesting is that the Inkatha Freedom Party is also contesting this election, with their number one candidate being Ronald Baloyi.

The other parties contesting here (with their top PR candidate in brackets) are:

No landslide victory for one party expected

In the other municipalities, the competition promises to be a lot fiercer than in previous elections. In Thulamela, the ANC enjoyed 79% of the support in 2016, with the EFF claiming 10% of the votes. This time around, 425 candidates from 15 parties are standing. A total of 16 independent candidates also hope to secure some of the 41 ward seats.

The DA may hope to improve their position at the Makhado Municipality, but this will be no easy task. In 2016, the ANC secured 75% of the votes, the DA collected 11% and the EFF 9%. The new list of candidates shows 370 names of hopefuls from 16 political parties. A further 10 independents hope to secure some of the 38 wards.

Musina is one of the smaller municipalities, but even here 137 candidates have thrown their hats into the ring. The list includes nine political parties and eight independent candidates. In 2016, the ANC secured 74% of the votes, compared to the DA’s 13% and the EFF’s 10%.

The Vhembe District Municipality (VDM) does not have wards and is a “catch-all” for the whole region. In 2016, this region had 607 100 registered voters, of which 46,7% cast their votes. The ANC collected 79% of the votes, with the EFF (with 9%) its closest rival. Many analysts believe that the situation will change dramatically this year. The names of 134 candidates appear on the VDM’s list for the municipal elections on 1 November this year.