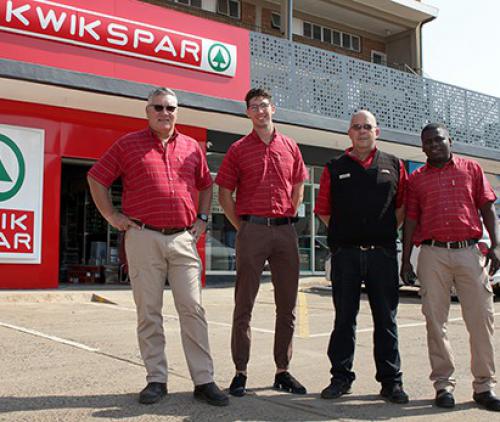 Ready for the grand opening of KWIKSPAR are (from left to right) owner Luke Enslin and managers Thomas de Beer, Chris de Beer and Vhutshilo Mulaudzi.

A new era in shopping convenience has dawned for many Louis Trichardt residents with the opening of a KWIKSPAR in the Da Silva complex in Krogh Street on 26 August (today). The opening of the store is the result of the entrepreneurial foresight of local businessman Mr Luke Enslin.

According to Enslin, the main reason for opening the KWIKSPAR was to alleviate the pressure on his other store, Soutpansberg Spar. “Numerous residents in this area have also begged me to consider opening a KWIKSPAR closer to them,” added Enslin.

Although KWIKSPAR’s product range is more limited than that of a normal Spar, the store rather focuses on freshness and convenience. “This store is typically for the customer who just quickly wants to get a few items on his way home from work. It will stock basic brands. We will put a huge emphasis on freshness regarding produce, meat and home-meal-replacement meals,” said Enslin. The home-meal-replacement meals will be prepared on site in the bakery.

In a time when many are downscaling their business interests because of the economic downturn caused by the worldwide Covid-19 pandemic, Enslin opted to invest. “I am so excited to bring residents some good news amidst tough economic times. Despite the pandemic and the major logistical nightmare it caused, we have overcome the challenges and are today able to open a state-of-the-art store,” said Enslin.

The KWIKSPAR is situated on the same premises that previously housed a Foodzone franchise. The premises were, however, completely revamped and expanded, with the KWIKSPAR now boasting 450m² of floor space. The opening of the store follows on the heels of the opening of a TOPS at SPAR (Loerie) conveniently situated right next to the store earlier this year. Enslin now owns three TOPS at SPAR stores in Louis Trichardt, as well as one in Pretoria. In addition to the KWIKSPAR, Enslin also owns Soutpansberg SPAR and the Louis Trichardt SUPERSPAR.

“Inside and outside, the KWIKSPAR is on par with SPAR’s standards,” said Enslin. He added that they had also negotiated with the landlord to free up additional parking space for customers in front of the KWIKSPAR by creating parking space for the tenants of the flats above the store behind the apartment complex. In future, tenants will not be allowed to park in front of the store. Having said this, parking space at the complex remains limited. “That is why the store will have five pay points. The idea is not to let customers stand in queues but rather to get them in and out of the store as soon as possible,” said Enslin.