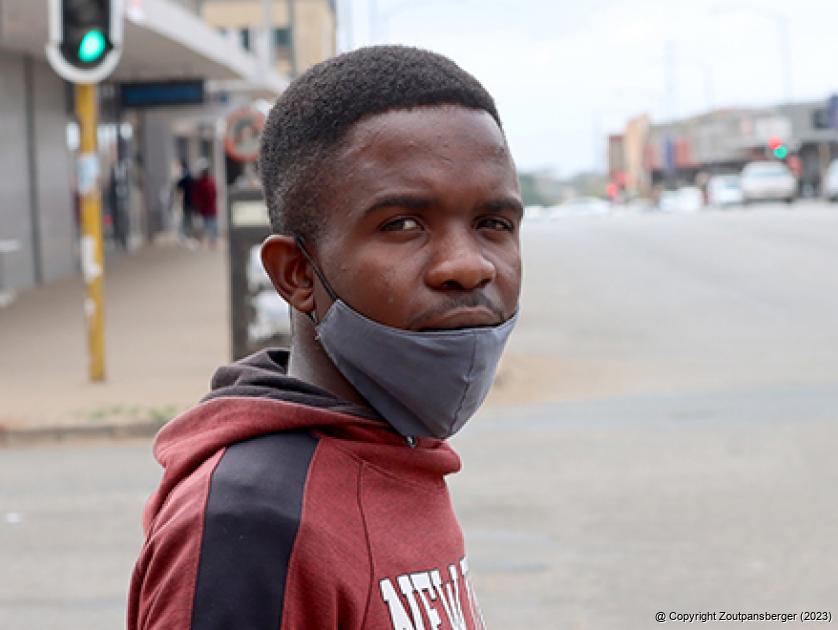 Thembi Siaga, one of the people who did the survey, shows how a mask is worn in an improper manner.

A quick survey done in Louis Trichardt indicates that women are more conscientious than men as far as the wearing of masks in public spaces is concerned. Out of the 724 people observed in different locations, 84,78% of the women wore masks, while only 68,16% of men properly covered their mouth and nose. Young adults seem to be the biggest culprits when in terms of not wearing masks in a proper manner in public.

The survey was conducted in five public spaces. The first location was the corner of Devenish and Burger Street, close to the taxi and bus rank. Here, 144 people were observed in an hour’s time. Out of these, 64 men and 30 women wore their masks on properly. The people wearing masks not properly covering their noses were also counted. In total, 18 men and four women were recorded in this category.

Because more men than women were counted in this group, the percentages are a better indication of compliance. Men were more prone to disobey the mask rules, with only 60,95% complying, versus the 76,92% of women who wore masks.

The second location was in the parking area near the corner of Songozwi and Burger Street, near the alley leading to the post office. This location had a higher percentage of compliance, with 84,29% of the women wearing a mask that covered their mouth and nose. In the case of the men, the percentage was 78,57%. In total, 168 people’s actions were recorded, 70 women and 98 men.

The third location was in Krogh Street near the municipal testing grounds. In an hour, 61 people were observed. Most of this group were males (50) and only 60% of them wore masks in a proper manner. Thirteen of the men wore no masks, while seven wore them under their noses.

The parking area of the Grove Centre in Songozwi street (Checkers centre) was the fourth observation point. Here, 119 people were observed, of which 81,25% of the women and 70,91% of the men wore their masks in a proper manner. Interestingly, five women and only two men wore no masks. The men who wore masks in an improper manner amounted to 14, versus the seven women.

On 10 August, the team returned to Burger Street, close to the taxi rank, but to a slightly different spot. In total, 233 people were observed, of which the majority (139) were women. The compliance percentage for women was high once more (89,21%), with only 68,09% of men fully complying with legislation. Eighteen of the men wore no masks, compared to four women.

The group of observers also made notes and tried to determine age groups for the people. The people were categorised into five groups, namely primary school, secondary school, young adults, adults and the elderly.

In the five locations, only 10 primary school children were spotted. The observations were done during the morning on a school day, which explains the low percentage of children. All the young children wore masks in a proper manner.

As far as the children in secondary school were concerned, the situation was much the same. Fourteen children were spotted, of which only one boy did not wear a mask. One boy and a girl wore masks that did not cover their noses.

The second-biggest group was the young adults, but was also the group with the lowest compliance. Out of the 238 young people observed, 11 of the women and 31 of the men wore no mask at all. The compliance percentage was 77,39% for women and only 62,60% for men.

The biggest group observed was adults. Out of the 292 people, 84,62% of the women wore masks in a proper manner, compared to the 65,14% of the men. Eleven women and 32 men were spotted wearing no masks at all.

The last group, the elderly, had a relatively high rate of compliance. Out of the 80 women, 95% wore masks in a proper manner, compared to the 78,89% of the 90 elderly men.