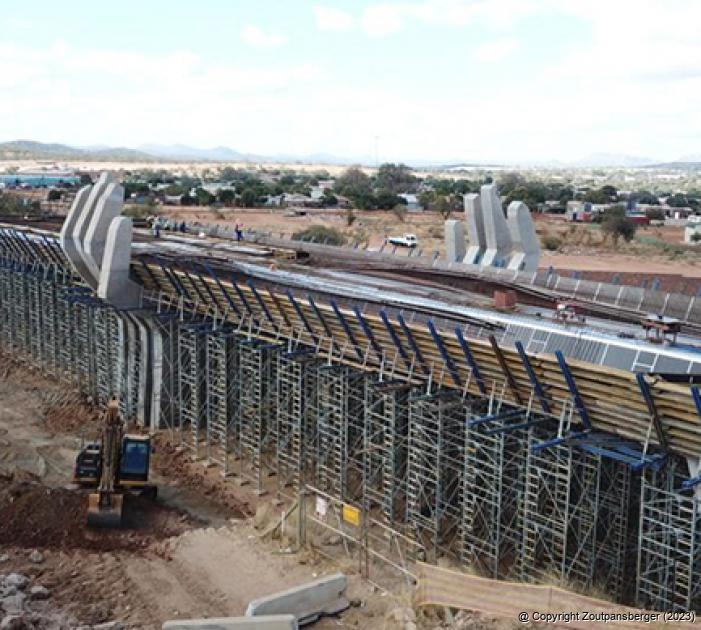 The construction of the piers in the form of hands at the Nancefield interchange bridge. Photo: SANRAL.

The South African National Roads Agency (SANRAL) said last week that the Musina ring road project was well underway and was sure to alleviate traffic congestion in this busy border town’s central business district (CBD) once completed in the second quarter of 2022.

“Travel time for the road users travelling in and around Musina is expected to be reduced significantly,” SANRAL said in a press release.

The project consists of the construction of approximately eight kilometres of single carriageway freeway to form the western ring road around the town. The alignment deviates from the existing N1 just south of Musina and ties back into the existing alignment just north of the town. Thousands of heavy vehicles use the N1 every day and pass through the Musina CBD, and these vehicles add to the traffic congestion in the town and create conflict with local traffic and pedestrians.

“Once completed, the Musina ring road will facilitate mobility, safe movement of goods and services in and around Musina,” said Hennie Kotze, SANRAL’s project manager, in the press release.

Kotze said that the R640-million project was progressing well. The stormwater infrastructure is complete as well as most of the earthworks. Except for the Nancefield interchange bridge, the other bridges are at advanced stages of completion. The contractor is currently progressing with layer works and surfacing.

“Apart from Covid-19-related restrictions that are proving to be a challenge not on the Musina ring road project alone, but on other projects managed by SANRAL across the country, we are confident about the anticipated June 2022 completion date, provided there are no further delays,” said Kotze.

The project provides access to opportunities for local community members and small, medium and micro-enterprises (SMMEs). Fourteen targeted enterprises from the Musina municipal area are currently employed to participate in the project. “Up to 12% of the R640-million contract value will be allocated to targeted enterprises, of which 10% will be allocated to women-owned companies. The contractor has exceeded the 12% and is currently standing at 14%,” said Kotze. He added that a contractual requirement to employ local labour, often referred to as targeted labour, also existed, to the value of 6% of the contract value. Of this value, 30% must be used on women and youth labour each.

“SANRAL recognises that it can help to build a capable and developmental state and drive economic development through the provision and maintenance of critical infrastructure. The Musina ring road project showcases how this is coming to life. Local businesses and communities will access employment through this project, as well as opportunities to tender for sub-contracting,” concluded SANRAL in the press release.