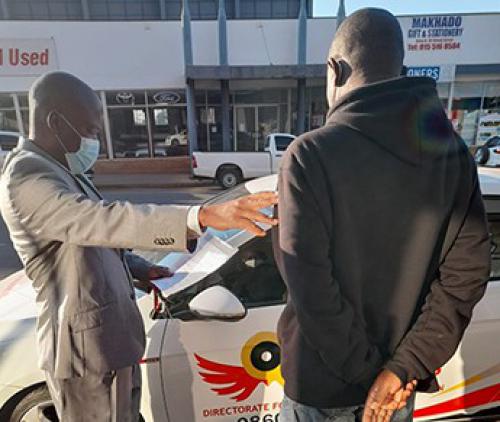 Company director Fhatuwani Rolet Nemanashi is being read his rights by a member of the Hawks following his arrest in Louis Trichardt Wednesday morning. Photo: Limpopo Hawks.

Company director in the dock for fraud

The director of Nemanashi Civils, Fhatuwani Rolet Nemanashi, appeared in the Louis Trichardt Magistrate's Court on Wednesday, following his arrest for alleged fraud by the members of the Hawks’ Serious Commercial Crime Investigation unit early the same day.

“Between April 2013 and October 2013, the company, Nemanashi Civils, was awarded a tender by the Department of Water and Sanitation to provide civil works at Albasini dam in Levubu. It is alleged that the company submitted fictitious invoices to the department that resulted in the loss of over R46 000,” said Limpopo Hawks spokesperson Capt Matimba Maluleke in a media statement. He added that these alleged illegal activities had been revealed by an audit report and the matter had been referred to the Hawks for further investigation.