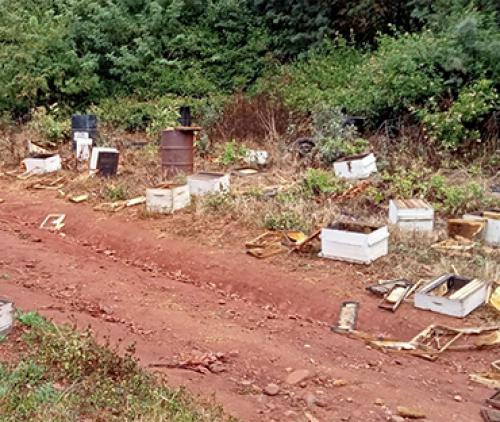 Total destruction. Farmer Fritz Ahrens recently lost 26 beehives placed on his farm to help with pollination. This was the scene at one of the beehive sites last Tuesday. Photo supplied.

Beekeepers at wits' end over plundering

Local beekeepers and farmers are at their wits’ end about a sudden spike in incidents of people plundering beehive boxes placed on farms to help with pollination. Apparently, these unscrupulous individuals are looking to make a quick buck by selling stolen honey. Carte Blanche on M-Net highlighted similar problems elsewhere in the country on Sunday evening.

Local beekeeper Charlie Gerber was especially hard hit. “The past six weeks have been especially rough on my beehives,” said Gerber. Gerber said thieves had first targeted his beehives on the farm of Braam Helberg on top of the Soutpansberg. “I lost four beehives here,” said Gerber. The thieves then moved down the mountain, targeting Fritz Ahrens’s farm. Ahrens is the chairman of the Louis Trichardt Farmer’s Association. In total, thieves destroyed 26 of Gerber’s hives at different locations on Ahrens’s farms last week. Thieves also targeted the farm of Dennis Gilbert, as well as that of Jacques Bouwer, where eight hives were destroyed. Eight hives were also destroyed on the farm of Wynand and Danie Louw.

“It does not help going to the police. They seldom come out to investigate, and when they do come out, you never hear from them again. If you do manage to arrest a suspect, you end up wasting three days in court, only for the thief to pay a R400 admission-of-guilt fine and laughing in your face as he walks out of the court room,” said Gerber.

Gerber believes that this is the work of an individual or a specific group of people. “They are stealing and making a living out of your hard work,” said Gerber.

Amidst the increase of beehives being destroyed, one theory is that this might be the work of honey badgers. Gerber debunked this theory. “It is easy to know if it is a honey badger (ratel) or a human. Badgers only go after the brood. They will only eat the pupae and larvae. They are not interested in the honey. People are not interested in the brood. They are interested in the honey, so if you get to a site and all the honey has been broken out of the brood chambers’ frame crown, the little bit of honey above the brood, you can be sure it is a human. If the brood has been eaten and not the honey, it was a badger,” said Gerber.

Ahrens said that although some of his beehives were sometimes plundered, the incident last week was more extreme. “The beekeepers are rendering their services for free. One beehive box is worth about a R1000, and it is a lot of work building up and caring for a hive. So, it is a lot of hard work destroyed by a couple of people wanting to make money out of your hard work. This destruction impacts very negatively on our farming activities. Without bees, we cannot produce food,” said Ahrens.

Another local beekeeper who is concerned about the situation is Chris James. “Just a bit of background. The 2020 season was the end of a dry spell. There are many factors that play a role in the wellbeing of bees, drought being one of them. So, the October/November time was at the end of a drought. There was a huge pollen and nectar shortage and there were reports of beehives going empty over the December period. That was the result of mainly the drought. Bees will abscond when there is no food. They will fly off to look for food. If they find food, they will survive, otherwise they will just die looking for it,” said James.

Following the recent good rains, James said, the bee numbers recovered and many of the beekeepers reported catching feral swarms that were available over the January period and they could replenish some of their hives. “A couple of weeks ago, however, we had a spate of attacks on our bees, people robbing and destroying hives. I spoke to Graeme Whyte (of the Green Farms Nut Company), because they have also had damage, and this can seemingly be ascribed to temporary workers who are now being laid off. They know the layout of the farms and they know where the hives are. Since it is the end of the harvest, there are no avos or nuts to steal, so they target the hives as a last opportunity to plunder something,” said James.

This is unfortunate said James. “The hives are not really fully stocked with honey yet, because it is only the beginning of the flowering season. So, to a great extent, they (the plunderers) are unsuccessful, but in the process, hives are broken, and bee swarms are lost,” said James.

The destruction places a lot of pressure on beekeepers. “Not uniquely so, in the sense that the socio-economic conditions impact everybody. I think this season the avo growers saw a far higher incidence of theft than other years. Certainly, in my case, as far as my avos are concerned, I had five robberies going through a substantial security fence. So, beekeepers are also victim to the larger problem of theft and socio-economic conditions in our country,” said James.

“We’ve historically had cases where guys had just driven in, picked up our boxes [beehives] and left us with nothing. So, this is a different type of theft. I suspect that these could be people who need hives for pollination or people who want to start farming with bees and cannot get hold of bees, because bees are in short supply,” concluded James.

The farms targeted appear to be mainly those scattered along the R524 road in the Levubu area.