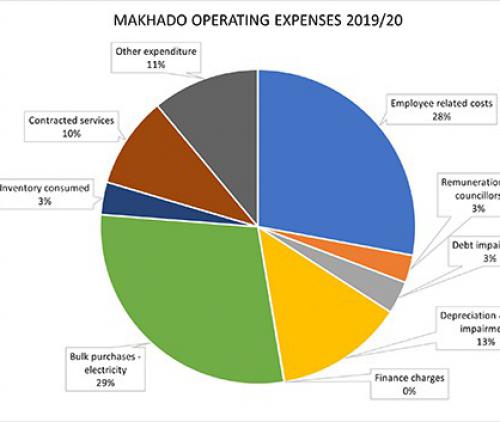 Perhaps the most puzzling part of the budget is the “other revenue” item. This has sky-rocketed to R203,4 million. Last year, R33,2 million was budgeted for this income, with a pre-audit outcome showing that only R7 million was collected.

The Makhado Municipality approved a record budget last month, with predicted revenue of more than R1,2 billion. How realistic is this, and will any money be left for real service delivery after expenses such as salaries and contractors’ fees are paid? We took a close look at this year’s operating budget and compared it to previous years’ figures.

The biggest part of the municipality’s income (37%) is derived from transfers and subsidies. This is money allocated from the equitable share of taxes and grants from the national and provincial government. The budgeted amount for this income is R440,4 million, which is realistic, seeing that the pre-audit outcome for the past financial year is more than that (R471,5 million).

The next big earner of income for the municipality is the profit made on the reselling of electricity. Makhado municipality buys bulk electricity, which it then distributes via its own network to consumers. This form of revenue constitutes 35% of the council’s income and is estimated to bring in R417,3 million.

Council announced an increase of 14,59% increase in electricity tariffs, which is in line with Eskom’s increases. This is also a factor that is controlled by the National Electricity Regulator.

Whether this figure is realistic, needs to be seen. The amount is almost 15% more than last year’s budgeted total (R364,2 million), but very optimistic when 2020/21’s pre-audited figure of only R236,5 million is taken into consideration.

Council’s income derived from the re-selling of electricity has dwindled in the past few years. In the 2019/20 financial year, this item brought in 41% of the income for the municipality (R351,5 million).

Revenue collected from refuse-removal services is expected to be R12,1 million. Last year, R11,6 million was budgeted and the pre-audited income reflected was R9.7 million.

The highly contentious property rates are expected to bring in R90,9 million in the coming year. Last year, the municipality budgeted for an income of R83,1 million, but the pre-audit outcome showed that only R66,3 million was collected.

The council approved a further 3,9% increase on property rates. Many regard this as “double-dipping”, because this is a rate based on the valuation of a property. Every four years, municipal valuers must prepare a general valuation roll with particulars of each property as at the date of valuation. As property values increase, the tax would increase. By increasing the percentage annually, the burden on taxpayers becomes exponentially more severe.

The Makhado Municipality is already one of the most expensive places to stay in Limpopo, based on the current property rates. Comparing apples with apples is not always easy, because each municipality has its own structure for calculating rates. Some municipalities offer a rebate for owners of residential properties, whereas others do not.

A rate payer staying in Louis Trichardt would have paid R858,50 in property tax last year on a residential house valued at R1,2 million. This will now presumably rise to R891,99 per month.

The “cheapest” municipality in Vhembe is possibly Musina. Properties with a market value of less than R75 000 are exempted from such tax. Even without any rebate, a R1,2 million house would incur a property tax of R479,10 per month.

In Polokwane, the municipality allows a R15 000 rebate as well as an additional R85 000 rebate on residential property. The owner of a house valued at R1,2 million would have had to pay R524,33 per month in property tax last year.

Selling sites to boost other income

Ironically, the interest earned from outstanding debtors comes in at number four of the top earners of revenue. Council hopes to collect R23,1 million in the coming year from individuals and organisations that are in arrears. This figure may be achievable, but the pre-audit outcome for the past year shows that only R20,7 million was collected.

A figure that may be described as very optimistic is the budgeted income for fines and penalties. The council hopes to collect R5 million in the coming year, which is R2,2 million more than last year’s budgeted figure of R2,8 million. The pre-audited figure shows that they only managed to collect R1,43 million the past year.

Perhaps the most puzzling part of the budget is the “other revenue” item. This has sky-rocketed to R203,4 million. Last year, R33,2 million was budgeted for this income, with a pre-audit outcome showing that only R7 million was collected.

When the council’s spokesperson, Mr Louis Bobodi, was asked about this he said that this figure reflected the potential income derived from the selling of several erven in Tshikota and the area south of Pretorius Street. “An amount of R143 million was provided for in the 2021/22 budgeted as income to be received from the sale of stands,” he said.

The budget figures also clearly indicate that the municipality’s reserves are on a downward trend. Council budgeted for R4,6 million in income from external investments. In the 2017/18 year, these investments brought in R9,3 million and in 2019/20 almost R7 million. The pre-audited figure shows that only R2,3 million was earned.

In terms of operating expenses, the biggest slice (31%) of the cake goes to employee-related costs. If the R32,2 million that the councillors will cost gets added to this figure, the percentage goes to 34%. Based on last year’s budgeted figure for employee costs (R287,6 million), the municipality expects this item to escalate by 17,8% to R338,9 million.

One of several “gremlins” that have crept into municipal budgets over the past couple of years is the use of contractors or the outsourcing of certain functions. In the 2017/18 financial year, this accounted for 24% of the operating expenses. The council seems to have been able to rein this in, and in the latest budget, it represents 10% of the expenditure, totalling R111,3 million. Last year, the municipality budgeted R85,1 million for this expense, but this was adjusted upward. The pre-audit outcome, however, indicates that R75,9 million was spent on contracted services.

The council seems to have a slightly pessimistic view regarding the ability of its debtors to pay what they owe to the municipality. The provision for debt impairment (the write-off of debts) is R57,9 million. Last year, the council budgeted for R41,1 million to be written off, but the pre-audited figure indicates that debt impairment was R31,9 million. In 2017/18, the council had to write off R136,3 million in bad debt.