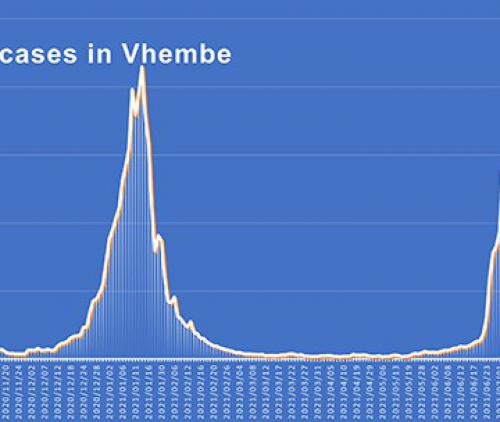 The latest figures show a steep rise in the number of infections.

The third wave is here and it is lethal

The third wave of Covid-19 infections has engulfed the Vhembe region, with a steep spike in the number of infections reported the past week. The Delta variant of the virus is also apparently responsible for most of the infections.

“Figures in the province jumped from 385 cases on Tuesday to 1780 cases on Saturday,” said the MEC for the Limpopo Department of Health, Dr Phophi Ramathuba, on Sunday. Ramathuba ascribed most of the new infections to the Delta variant.

A worrying aspect is that the virus seems to be affecting younger people. Ramathuba said that the province has seen increased numbers on low age categories. The past week, 67 cases of children between 0- 9 years have been reported while 638 cases are for people between 15 to 34.

The death toll also spiked in Vhembe. On 29 June the Covid-19 death toll stood at 497, but within days it moved to 524. It is expected to rise a lot further, as more cases get reported.

Ramathuba warned Limpopo residents that they need to be extra vigilant. “Our people need to understand that this variant will make it extra difficult to keep numbers low,” she said and called for behavioural changes. She said social and political gatherings are a recipe for disaster.

“If our people will continue to defiantly organise parties and other social jamborees, the spread will be too difficult to contain,” she warned.