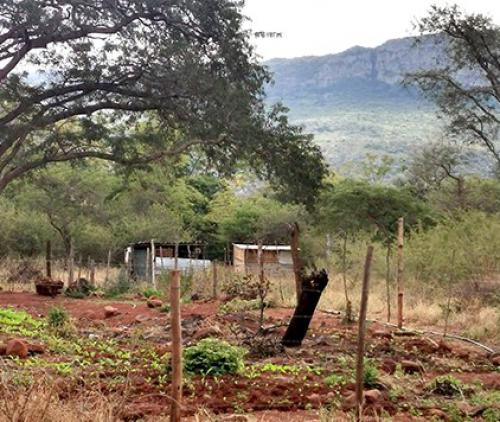 Illegal structures are mushrooming at the farm, much to the concern of the CPA. Photo supplied.

Kranspoort has a long history of injustices

Yet another Communal Property Association (CPA) is becoming more and more entangled in infighting and land grabs, to such an extent that the court will yet again be asked to intervene. This time around, the historical Kranspoort CPA, with 2 400 ha of land situated in the western Soutpansberg, is involved.

The Kranspoort land claim was one of the first to be awarded in Limpopo, filed in 1998 by former Kranspoort residents who were forcibly removed in the period between 1955 and 1964. On 10 December 1999, judges Alan Dodson and Bakone Justice Moloto ruled in favour of the claimants. What makes the case so intriguing is that land was awarded to people who had no long history of inhabiting the area.

To understand the complexity of the Kranspoort land claim, one must go back to the mid-19th century. During this period, the Dutch Reformed Church (DRC), at that stage mainly active in the then Cape Colony, opted to expand its missionary activities. The church found it quite difficult to recruit local reverends to enter the missionary fields and had to look for a suitable candidate abroad. The Scottish reverend, Alexander MacKidd, was keen to take up the challenge and embarked on a trip to this foreign land.

MacKidd could not start preaching immediately as the northern parts of the country was under the rule of the Zuid-Afrikaansche Republic (ZAR), which was not very accommodating and did not trust missionaries. Teaching the Gospel to black or coloured people was illegal and special permission from the local magistrate was needed for this. MacKidd therefore had to wait, and only in December 1862 did opportunity come his way. The Buys community from the Soutpansberg invited him to come and stay among them and teach the gospel. The letter inviting him was signed by Michael Buys, one of the sons of the legendary Coenraad de Buys. De Buys and his family arrived in the Soutpansberg in the early 1820s. He disappeared without a trace in 1829, leaving behind his family on the banks of the Limpopo River.

MacKidd arrived in the Soutpansberg on 13 May 1863 and started preaching on the farm Goedgedacht, west of the then Schoemansdal. This farm was donated to the church by the Lottering family. MacKidd realised that the original farm was not ideal for what they intended to do and, using his own money, he bought the farm Kranspoort. (He paid 450 “Rijksdaalders” for the farm.) This would become the base from where missionary work was to be done for the next century. In his will, he specified that ownership of the farm, Kranspoort, should be transferred to the church, on condition that it be used for missionary work. Rev MacKidd died on 30 April 1865.

After Rev MacKidd’s death, the legendary Stephanus Hofmeyr took over the reins at Kranspoort. He was considered to be the first “Afrikaner” missionary in the ZAR.

Hofmeyr was not always popular among the conservative Afrikaner community, but he managed to expand the mission station and spread the Gospel far and wide. During the 40 years that Hofmeyr served as missionary, the congregation grew, and a large contingent of predominantly Sotho-speaking people settled at Kranspoort.

When Hofmeyr passed away in 1904, he as buried at the foot of the mountains alongside “his people” as he referred to the congregation that he had helped establish.

Unfortunately, the work that MacKidd and Hofmeyr started did not continue in the decades that followed. The foundations that were laid were solid and a large number of black and coloured evangelists started to spread the Gospel. Hofmeyr’s son in law, Johannes Daneel, served as reverend at Kranspoort until 1935 and he was much loved and popular.

The changing political atmosphere in the country unfortunately started to affect the activities at the mission station and the DRC’s often lackadaisical approach to its missionary duties did not help. In the 1950s, racial tension increased at Kranspoort, possibly spurred on by the arrival of Rev Lucas van der Merwe in 1946. His manner of implementing rules governing who could stay or who had to leave the farm was met with criticism and eventually led to an uprising.

The notorious Group Areas Act was later used to remove a large number of families to places such as Nancefield in Musina. The Kranspoort mission station became a red herring for the DRC, with the church not willing to take a definite stand against the policies of the ruling government.

When the last black families were removed from the farm in 1964, the descendants of Stephanus Hofmeyr started questioning whether the land was still being used for missionary work. If not, the family members argued, it should revert to the Hofmeyr family. The issue ended up in a prolonged legal battle, with the family asking that the wish of MacKidd and later Hofmeyr should be honoured and that the land be used for missionary work.

Unfortunately for the family, the DRC obtained a declaratory order in the High Court in 1985, effectively deleting a section of Hofmeyr’s will. The church then proceeded to subdivide the farm and sold off one portion.

In 1997, the last remnant of Hofmeyr’s work, the Stephanus Hofmeyr Farm School, was closed. Two years later, a land claim was filed by the families who were removed in the 1950s and 1960s. The claim was approved at the end of 1999 and the affected families could commence with the gradual process of moving back to the land they were once forced to evacuate.

The process, unfortunately, did not run smoothly. A communal property association (CPA) was established, and a business plan was devised to manage the property. The CPA members, however, claim that they had received no funds to develop the infrastructure or cover the operational costs, such as to implement livestock production, crop and fish farming, or ecotourism.

In February 2020, the Department of Agriculture, Land Reform and Rural Development gave the residents a recapitalisation grant of R14 million, which was to be deposited in two tranches. The first tranche would be R11 million, with the outstanding amount deposited once the first amount had been fully utilised.

Weizmann Hamilton, secretary of the executive committee of the CPA, told the online publication New Frame that only a small portion of the R11 million had been used because the department had fought the community almost every step of the way.

To complicate matters, other people who are not members of the CPA started to invade the farm. According to Solomon Thobye, a trainee manager at the farm, they noticed back in 2016 that people were illegally taking their cattle to graze on the farm. Efforts to seek assistance from the Mara police to act against the guilty parties were unsuccessful.

The CPA turned to the courts for protection and eventually, on 19 September 2019, an order was issued, prohibiting the cited parties from allowing animals to graze on the property. In the court documents, two people, namely Seakamela Mohlabi and Seakamela Madikana October, are mentioned as respondents.

In 2020, more problems started, with people from neighbouring areas starting to put up shacks and denuding the area.

Delcon Mei (32), a third-generation resident on the farm whose grandmother is one of the original claimants, told New Frame that the natural resources on the farm were being destroyed by people from neighbouring communities as well as the unrecognised claimants. “They cut trees that are protected, such as mopane trees and baobab trees. Those trees should not be cut as some of them are centuries old. They cut them with chainsaws,” said Mei. “There are many leopards here and some people have been poaching them.”

Apart from logging the trees, the unrecognised claimants have allegedly leased portions of the farm to people whose livestock need grazing, causing more harm to the ecology.

Mei explained that the claimants had many mixed-use plans for Kranspoort. “Part of the place is reserved for agriculture [cooperative farming] and some part of it is reserved for subsistence farming and residential, and some parts of it are reserved for developing projects. There is even a lodge that’s planned to be built here. We want to make a game farm on that side. There is even a waterfall that runs through the mountain. The river never dries – it is forever flowing,” she told New Frame.

The CPA is currently in the process of approaching the court yet again to intervene and force the police to act against the intruders.

(The article in New Frame can be accessed here: https://www.newframe.com/kranspoort-farm-lies-fallow-as-department-dithers)