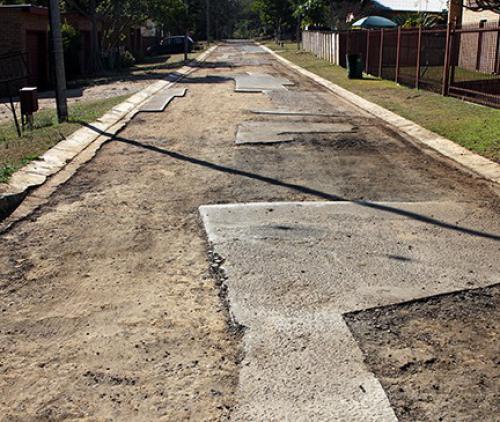 The “start-stop” approach refers to contractors' ripping up sections of streets and then leaving them unattended for days or even weeks on end before they are resurfaced again, like here in Duiker Street.

Residents happy about project but not about process

The Makhado Municipality has embarked on a project to resurface many of Louis Trichardt’s pothole-infested streets. This came as good news to many, but some are questioning the “start-stop” approach the municipality is taking to the project.

The “start-stop” approach refers to contractors ripping up sections of streets and then leaving them unattended for days or even weeks on end before these are resurfaced again. Some residents complained to the newspaper, saying that this approach was causing even more damage to vehicles than the initial potholes, especially at night as no warning signs are in place to warn motorists that the road surface has been removed. Members of the public also wanted to know if this is the work of only one contractor or was more than one contractor appointed to fulfil different aspects of the contract, which might explain the “delay” in moving from one process to the other.

In response, the Makhado municipal spokesperson, Mr Louis Bobodi, confirmed on Tuesday that the project for the resurfacing of streets had been out-sourced to private contractor. “The municipality appointed contractors in order to expedite the process of repairing damaged streets,” said Bobodi.

Bobodi stated that the project was put out on tender and the successful bidders (contractors) were duly appointed. He did not say who the contractors are.

Regarding the “delay” between contractors ripping up the road surface and resurfacing it again, Bobodi said that they were not aware of any delays. “The contractors are still within the timelines and conforming to the requisite scope of the work,” said Bobodi. He added that the contractors, each assigned to a specific street, were working according to a plan.

Some contractors appear to forget about the plan, however. Such was the case with the resurfacing of parts of Joubert Street a few weeks ago. Halfway between Kruger and President Street, the resurfacing stopped, and, to date, ripped-up sections of the road remain open. In response, Bobodi said that the project would be completed in its entirety. When this will happen is unknown.

Complaints also surfaced that some of the contractors were illegally dumping the ripped-up road surface next to the road leading to the municipal airfield (behind Tshikota). Bobodi said they were aware of the situation. “Yes, we are on top of this issue and contractors are quite aware that we won’t effect their respective payments if they do not deposit dumping materials at prescribed areas,” said Bobodi.

Regarding which streets would receive priority in terms of resurfacing and fixing potholes, Bobodi said that all streets that developed potholes would be attended to. He could not, however, supply a time frame for the project. “The maintenance plan is not cast in stone as we always attend to streets that need attention as and when the need arises,” said Bobodi.

Recent good news for residents is that the Makhado Municipality made a total of R13 million available for the rehabilitation of Kruger Street, Vlei Street, the Commissioner and Main Street intersection in Eltivillas and the road in front of Soutpansberg Spar in their 2021/22 budget. Bobodi was asked to explain what exactly these projects would entail. “We always have a dedicated budget for maintenance and the subsequent projects for the incoming financial year will only be unpacked as soon as we have the scope of work from the engineers,” stated Bobodi.