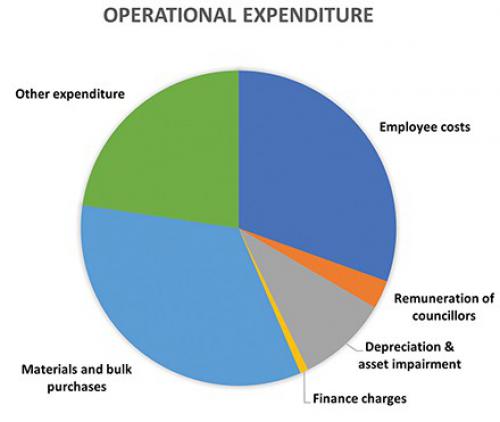 A chart indicating the Makhado Municipality’s expenditure for their next financial year.

Makhado Mayor Samuel Munyai delivered his budget speech last week after tabling the Makhado Municipality’s budget for the 2021/22 financial year. He has ambitious plans for the region in an important election year, but whether the municipality will be able to deliver on all their promises remains to be seen.

The operational revenue budget amounts to R 1, 201, 834 billion, while the operational expenditure budget amounts to R 1, 111, 661 billion. Once again, the biggest expense will be the municipality’s salary bill, totalling R338, 896 million rand and making up 30% of the municipality’s total operating budget. The salaries and wages have been budgeted for at an overall increment of 6.25% and new vacant posts from the Fixed Staff Establishment approved in the 2021/2021 financial year have been budgeted for.

So, where is the money going to come from?

Almost half of the municipality’s “income” will once again come in the form of grants, totalling R511, 941 million. An equitable share of R401, 747 million will come from the National Treasury, while the Municipal Infrastructure Grant (MIG) totals R94, 768 million. The Financial Management Grant will be R1,850 million, while R2, 280 million will be received for the Extended Public Works programme. From INEP, they will receive R11, 296 million.

As for own income, the municipality plans to recover R90, 852 million in property rates over the next year, while getting R417, 348 million through the sale of electricity. Other income has been budgeted at an amount of R203 million and this includes a projected income of R142 million to be generated through the sale of new residential stands. The areas to be affected are south of Pretorius Street, Louis Trichardt Township, Dzanani Township and Tshikota Extension 1 Township.

The most important part of the annual budget remains the capital expenditure budget. This is the budget that is actually used to get things done in the form of projects. This year’s capital budget amounts to R424, 622 million and most of the projects included in the budget will be financed through the municipality’s own income. Capital projects not completed from the municipality’s own funds, amounting to R45 million the previous year, have been rolled over to the 2021/22 budget year.

More bang for your buck?

So, what can taxpayers expect for paying their hard-earned money over to the municipality each month?

As far as Louis Trichardt is concerned, a number of long-overdue projects are being planned for the coming financial year. These projects will be funded through the MIG and the municipality’s own income.

The most ambitious project is the development of roads and stormwater drainage for 700 new residential stands south of Pretorius Street and 164 new stands in Tshikota. An amount of R42, 500 million was budgeted for this project.

Somebody needs to pay

To keep the operational budget’s wheels turning, local taxpayers will have to pay more in terms of rates and tariffs. The municipality has budgeted for a 14,59% increase in electricity tariffs. Property rates will increase by 3,9%. Other services, such as refuse removal, will also increase by 3,9%.

“This budget will be a yardstick to measure our performance as a municipality and we trust that our communities will continue to participate in the forthcoming public-participation meetings in order to monitor the progress in this regard,” said Munyai in his speech.