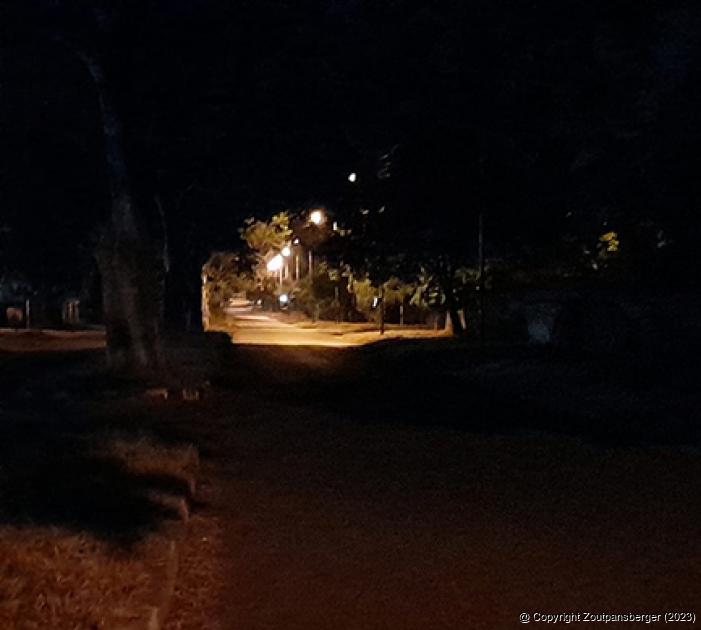 Numerous streetlights in the Old Town residential area have not shed any light for years now, while many properties are left in dark shadows at night, exposed to criminal activity.

While the crime rate continues to increase day by day, a large part of Louis Trichardt’s residential area grows darker and more ominous every night as streetlight after streetlight dies without any apparent attempt from the Makhado Municipality to fix and maintain them regularly.

Residents might not feel quite so exposed by this ascending darkness if they had the certainty that the police were conducting regular street patrols at night to offer the visibility of their authority, as well as a feeling of safety and protection. But, sadly, this is not the case.

According to Makhado police spokesperson Constable Irene Radzilani, the police are working “hand in hand” with rural safety structures, including the town watch and various private security companies. “Community members have also organised themselves to patrol their areas to assist the police with the fight against crime,” Radzilani said.

But, while these ‘safety structures’ are sometimes seen, residents claim they hardly ever see police vehicles joining in the “fight against crime” and patrolling these dark neighbourhoods at night.

Danie Pita, chairman of the Soutpansberg Town Watch, says they have a good standing relationship with the local SAPS, “supplementing” each other’s shortcomings in a manner of speaking. He says that getting a quick reaction from the police when an emergency arises does become a problem from time to time, as the police do not always have enough vehicles on hand, but they usually find a way to work around that.

Somehow this does not offer as much reassurance as one might have hoped for. Broken streetlights on the one hand and insufficient protection around dark streets on the other, however, leave nothing but an open invitation for criminals to sneak into yards freely and undetected at night to break into homes, ultimately stoking the crime rate to a higher level, while a community is left in a state of hopeless disquiet.

The New Town area does not seem to be as affected by the growing darkness as people residing in the Old Town area, who claim that some streetlights in this neighbourhood have not provided any light in years, despite being reported numerous times.

Quintin Sillands says five broken lights can be found in Douthwait Street between Joubert and Rissik Street, but no one ever comes to fix them. Angela Versari and her neighbours, Mariza and Gideon Joubert, say the streetlights have not been working in the vicinity of Songozwi- and Douthwait Street for donkey’s years.

Chantel de Troch says they have reported the ones not working in Anderson Street several times over the past three years, without success, while two lights in Ruh Street, between Munnik- and Anderson Street, went out in December last year, leaving at least two properties dangerously dark and vulnerable to criminal activity at night. They have also been reported, but no-one has yet made an effort to repair them.

In Rissik Street, between Krogh and Anderson Street, the lights have also been out for years, according to Frans Bouwer. “I can’t believe that no one on the council ever notices that the dead streetlights are not being fixed,” Bouwer said.

At the time of our going to press, the whole of Joubert Street in front of the Zoutpansberg Private Hospital was without a single working streetlight, as well as in Kock Street and nearly the whole Skuldbult area at Barnard and De Vaal Street, as well as Schimper Crescent.

These are only a drop in an ocean of the same complaints in one part of town.

An anonymous resident, living alone and desperate for someone to fix the broken streetlights in front of her home, decided to call the head of the electrical department, Mr Thomas Matodzi, directly on 12 May this year, after she got no reaction. She told Matodzi that she could hear people creeping around her dark yard at night and that she feared they might eventually try to break into her house. Matodzi sincerely apologised about the lights’ not being repaired and explained that he was in the process of drafting letters to get in extra help to assist with the backlog of repairing streetlights. He asked her to be “just a little patient” with them, because once they began, he said, they would start with the main streets first (including Songozwi Street). He could not, unfortunately, tell her how long they would take before moving on to the residential areas, so that her lights could be repaired too.

One would think that starting in residential neighbourhoods, where most people’s lives are immediately at risk at night, should make sense, but alas. “This is not a new problem,” the anonymous woman said. “Residents have been complaining about dark streets for many years now, while the municipality just looked the other way. Now the backlog is so great that they need to employ extra people to come and help get it under control … It is inconceivable that the local municipality has so little regard for the community’s safety by playing blind and deaf to everything that demands an effort on their part. Being understaffed is not an acceptable excuse anymore, after so many years, as to why the community must continue to ‘be patient with them’ and endure being subjected to crime.”

Some of the community’s questions were presented to the municipality for answers, namely why the municipality does not maintain the streetlights and check that all are in working order on a regular basis; how many municipal technicians are currently deployed for maintaining the town’s streetlights; why the electrical department – which has such a crucial function regarding service delivery to the community – is still not efficiently staffed with permanent technicians for the workload required to maintain the town’s streetlights; whether extra workers have been appointed and whether they had started repairing the streetlights; and the reason for starting with these repairs in the main streets, instead of the residential areas, where 90% of the grievances about streetlights come from?

Makhado municipal spokesperson Mr Louis Bobodi gave their vague reply (as on 25 May): “We are currently assessing them and in the next two weeks we will have attended and fixed everything.”