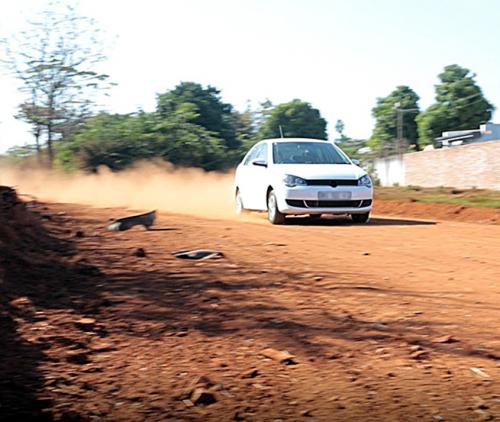 The dust pollution was especially bad after Saturday’s rugby matches as vehicles kicked up massive amounts of dust.

Fight will not be over until the dust settles

The dust is literally far from settled as anger grows among Eltivillas residents over the severe dust pollution caused by vehicles traveling on the access road to and from the newly built Louis Trichardt Rugby Club.

Eltivillas residents’ troubles started when the Louis Trichardt Rugby Club, among others, was relocated to a new site as part of expanding the Makhado Crossing shopping mall into a regional shopping mall. The construction work was undertaken by the mall’s developers, the Masingita Group of Companies. Prior to relocating the rugby club to its present premises, the club’s entrance was along the R524 road (to Levubu). The new entrance road now connects the rugby club, situated behind the show grounds, with First Avenue via a dirt road running parallel to First Street, literally right behind some residences.

Since the initial construction work started on the new mall, Eltivillas residents say, the Makhado Municipality has been turning a blind eye and deaf ear to their complaints. In December 2019, the Zoutpansberger followed up on residents’ complaints about the dust pollution in Eltivillas and sent through a list of questions to municipal spokesperson Louis Bobodi for comment. The newspaper, among other things, wanted to know who is responsible for the road (the municipality or the Masingita Group), whether no other suitable entrance road was available, such as the existing road through the show grounds or again via the R524, and whether the road would be temporary or made permanent by tarring it? To this day, Bobodi unfortunately has yet to respond to our media enquiry.

“We were told as residents that this road behind our homes was just a temporary measure, but nothing has been done. The road remains … We are being affected by the dust on a daily basis – our homes, our health our children’s health. Really! We are completely and thoroughly frustrated,” said First Street resident Ms Adila Aboobaker.

“Like Adila mentioned, this was only to be a temporary measure while the construction of the mall was taking place and they shifted the rugbylapa to the other side. It was only supposed to be a temporary road … We want to spend money on our homes, but every time we spend money, it is worthless because within 24 hours it is covered in dust,” added another First Street resident, Mr Ismail Ayob.

For Ayoub Qasim, the situation is a nightmare. “This road is very dusty. It affects my wife and my son, who are asthmatic. They are suffering with this daily and it’s costing me a lot of money to keep on buying medication for them … I hope the municipality either paves the road or closes the road, because we cannot tolerate this any longer,” said Ayob.

Also frustrated with the problem was Mr Areef Cassim. “Every day it is the same old story – the municipality not listening to us … Please, Makhado Municipality, do something. We can’t go on like this,” he said.

The same set of questions sent to the Makhado Municipality on 5 December 2019 was forwarded to them again on Monday. At the time of our going to press, Bobodi said that he had sent the questions to the relevant department and was awaiting their response. The questions were also sent to the Masingita Group of Companies, who undertook to respond once they had discussed the matter at management level.