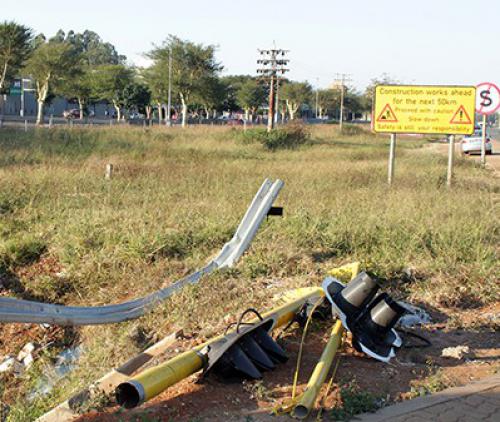 The damaged traffic lights at the N1/R524 intersection in Louis Trichardt (at the mall) do not only belong to nobody, but nobody has the responsibility to maintain or fix them in the event they are damaged either.

These traffic lights were erected as part of a road-upgrade agreement with the Masingita Group of Companies when they expanded the Makhado Crossing shopping mall into a regional mall about two years ago. The aim was to ease traffic congestion at this extremely busy N1 intersection with the R524, the main road in and out of Venda.

Some three weeks ago, a vehicle accident uprooted two of the traffic lights at this intersection, causing all the traffic lights to fail. Since then, the traffic lights have been out of order and nobody has even taken the initiative to at least put up temporary four-way stop signs. The total lack of traffic control at the intersection is now causing major traffic jams, especially during peak traffic periods, with sporadic incidents of road rage as frustration mounts among motorists.

About two weeks ago, the Zoutpansberger set out to find out why the authorities seem to feel absolutely no urgency to restore the traffic lights to working order and avert a possible fatal accident. The intersection is no stranger to accidents, many of them proving to be fatal in the past.

One would have thought that, since the traffic lights were erected along the N1, their upkeep would fall under the jurisdiction of the South African National Roads Agency (SANRAL). You would have been wrong.

Upon enquiry, SANRAL responded by saying that the traffic lights in question were not their responsibility. “Kindly note that the South African National Roads Agency SOC Limited (SANRAL) does not manage the operations and maintenance of traffic lights. This function falls under the municipality’s mandate,” was SANRAL’s response.

The Makhado Municipality turned out to be unaware of this responsibility. “The robots [traffic lights] you are talking about are the competency of RAL [Road Agency Limpopo],” was Makhado municipal spokesperson Louis Bobodi’s response.

RAL was also quick to deny responsibility. “I have just verified that the road you are referring to belongs to SANRAL. I think they would be best placed to respond to you,” was the response received from Mr Maropeng Manyathela, spokesperson for the RAL when asked whether they intended to fix the damaged traffic lights.

The Zoutpansberger could determine, although not confirm, that the initial agreement with the Masingita Group for the upgrade of the mall stipulated that they would erect the traffic lights, after which the responsibility for the maintenance and upkeep of the traffic lights would revert to the Makhado Municipality.

Bobodi was contacted once more and asked if he was aware of this agreement, or whether he was sticking to his response that the Makhado Municipality was not responsible for the maintenance and upkeep of the traffic lights in questions. Regarding this, Bobodi responded on Tuesday by saying: “As things stand now, the robots [traffic lights] are not in our assets, but for safety purposes, the municipality is going to attend to them.”

By Wednesday morning this week, the traffic lights were still out of order and nobody had even made an effort to remove the two damaged traffic lights lying next to the road.