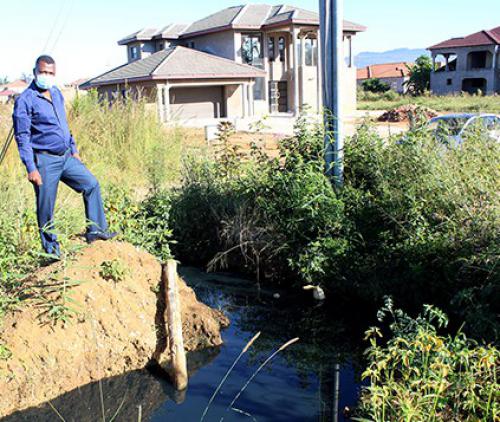 The stench of raw faeces, mixed with the sound of swarms of mosquitoes, greets one when entering Roshni and Bengal Street in Eltivillas in Louis Trichardt. After more than a decade, the problem with the dysfunctional sewerage system has still not been resolved and residents have had enough of living with this ever-present stink.

Wastewater that flooded an entire street a while ago now merely flows down a trench along Roshni and Bengal Street. Mr Rendani Mudau, a resident in this area, said that he had contacted the municipality about the problem on many occasions, but the problem never got resolved. When the municipality does come out to unblock one part of the sewerage system, another part blocks up again and spews the stinking water into yards and streets.

In the mornings and afternoons, children can be seen playing in the smelly streets, even though parents and guardians warn them to stay indoors. “Children will always be children; they sneak out to play outdoors, and we are afraid they might catch dreadful diseases from this raw sewage,” he said. “It seems as if the municipality doesn’t care about our health, and our health is at risk now. I can’t even open the windows because of this terrible smell. My children cannot play outside because of human waste floating down the streets!” he said indignantly.

Local attorney Vhutshilo Phuravhathu, who also resides in that area, feels something drastic should be done about the municipality for putting residents’ health at risk. “No, there are people living here. This is rubbish!” he exclaimed. He said that residents planned on taking legal action against the municipality. “The sewage attracts flies and mosquitoes. It’s even worse when it rains. When cars drive past, sewage water splashes onto our kids playing outside, so they’re kept indoors as much as possible. It’s unacceptable,” Phuravhathu said.

The spokesperson for the Vhembe District Municipality, Mr Matodzi Ralushai, said he was aware of the problems and their technical department would address the problems soon.