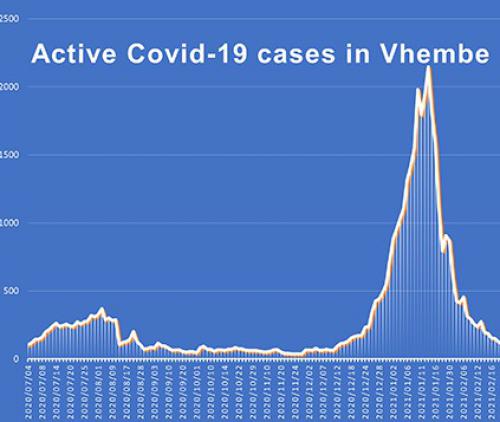 The latest available statistics indicate that the Vhembe region is in a "quiet" period, with very few active Covid-19 cases.

It's quiet, but don't even think of letting your masks down

Amidst speculation that a third wave of Covid-19 infections is about to hit the country, the Vhembe District has been very quiet. At the start of the week, the official figures indicated that 23 active coronavirus cases could be found in the region, with a total death toll of 462.

The latest figures are very different from mid-January this year, when the second wave of infections peaked. On 13 January, the official figure for active infections in the Vhembe District stood at 2 147. Most of these were in the Thulamela District (842), with Makhado not far behind on 770. At that stage, the official Covid-19 death toll was 105.

The second wave’s lethal remnants were seen in the following months, with the death toll rising rapidly. Most of the fatalities were in the Makhado municipal area (213), with Thulamela (163) not far behind. In the Collins Chabane Municipality, 67 Covid-19 deaths were recorded and in Musina 19 people died after being infected. The cumulative number of infections in Vhembe stood at 11 698 on 3 May.

But can the figures be trusted?

The problem that the conspiracy theorists battle to deal with is the steep rise in the death toll in the country the past year. If anything, the figures reported of people dying indicate that Covid-19 deaths are vastly underreported.

Unlike most sicknesses, deaths must be reported, and concealing a death is a crime. These figures are recorded on the National Population Register and are used by government departments and other institutions to do predictions and planning. Institutions such as the SA Medical Research Council (SAMRC) use the figures collected over many years predict to fairly accurately how many people are expected to die every month and even in a specific week.

The worrying part, however, is that many more people died the past year than was expected. “Since 3 May 2020, there has been a cumulative total of nearly 156 000 excess deaths from natural causes of persons 1+ years of age of which about 73 000 occurred in 2021 (since 3 Jan 2021),” says the SAMRC in a report published last week. The report was compiled in conjunction with the University of Cape Town’s Centre for Actuarial Research.

Even if the official figure of just more than 54 000 Covid-19 deaths is taken into account, that means more than 100 000 more people died than what would be considered “normal”.

The situation in Limpopo

Even though the Limpopo Province is not among the top three as far as excess deaths are concerned, the number is alarmingly high. The past year, 14 484 more people died than what the figures predicted. The latest available figures indicate that 63 680 people contracted the disease, with a death toll of 2 272.

Which means that, in this province, 12 212 more people died than what could reasonably be anticipated. In real terms, this means the province has “lost” an average-sized town.

Whether the excess deaths can all be attributed to Covid-19 is debatable and uncertain. What is worrying, however, is that the trends and the graphs show clearly that excess deaths peak when Covid-19 infections peak.