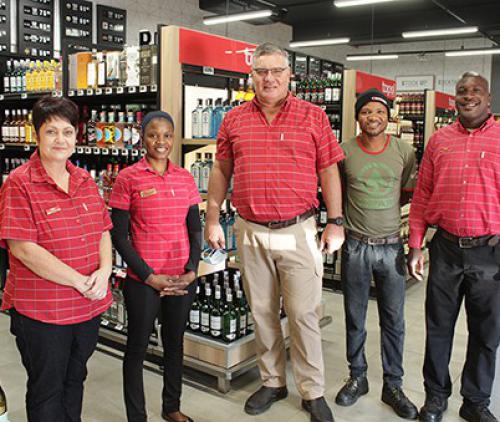 Development will also include a KWIKSPAR

Amidst tough economic conditions because of the negative impact of the worldwide Covid-19 pandemic, Louis Trichardt businessman Mr Luke Enslin is not cutting back like many businesses are doing. No, he is continuously looking at investing in and expanding his business interests.

Last week, Enslin opened his third TOPS at SPAR liquor store in the Da Silva complex opposite BB Mount Fuji Motors in Krogh Street. His vision, however, also includes the opening of a KWIKSPAR in the same complex. “If people see development, they see hope,” said Enslin.

For the past couple of months, a flurry of construction activity has been going on at the complex. Most notably was the upgrading of the TOPS liquor store. The store was previously known as LiquorZone, which Enslin bought from the well-known Van Rensburg couple, oom Hennie and tannie Rita, mid-2020.

The newly revamped TOPS at SPAR (Loerie) officially opened last week. The revamp included bringing the branding up to TOPS standards and expanding the floor space from 160 m² to 244 m ². The number of pay points was increased from two to four, with the addition of extra walk-in fridges. Enslin is particularly proud of his new chilled wine cellar. “It keeps our wide variety of well-known wines at just about a cool 10°C. We also created a ‘braai’ section where you can buy anything you would need for a braai – from wood to a cooler box,” said Enslin.

The biggest news, however, is Enslin’s announcement that he is in the process of also opening a KWIKSPAR next to TOPS (Loerie). “The main reason I am opening the KWIKSPAR is to alleviate the pressure on Soutpansberg Spar. Numerous residents in this area have also begged me to consider opening a KWIKSPAR closer to them,” said Enslin.

Although KWIKSPAR’s product range is more limited than that of a normal Spar; the store rather focuses on freshness and comfort. “This store is typically for the customer who just quickly wants to get a few items on his way home from work. It will stock basic brands. We will put a huge emphasis on freshness regarding produce, meat and home-meal replacement meals,” said Enslin. The home-meal replacement meals will be prepared on site in the bakery.

One of the biggest considerations Enslin had to consider in deciding to open the Kwikspar was parking. At this stage, most of the available parking is taken up by tenants of the second-and third-storey apartments. “I have negotiated with the landlord and he will create parking space for the tenants behind the apartment complex. By the time the Kwikspar opens, no tenant will be allowed to park in front of the complex anymore,” said Enslin. Having said this, parking space at the complex remains limited. “That is why the store will have five pay points. The idea is not to let customers stand in queues but rather to get them in and out of the store as soon as possible,” said Enslin.

Enslin said that he was pushing to open his 450m² KWIKSPAR in June this year. “It will be a state-of-the-art shop when we open,” said Enslin.