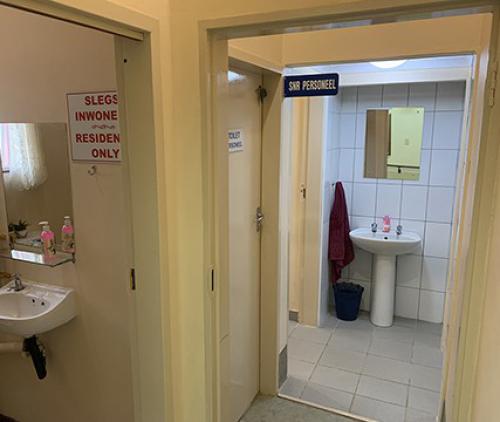 It is not sure if the issue of separate toilets for white and black people relate to the toilet allocated for the use of elderly and weak residents of the frail care unit at the old age home. This was done for medical and safety reasons (especially during the lockdown period). Direct adjacent to this toilet (left), which is clearly marked for residents only, is three more toilets for all the staff.

Allegations of racial discrimination by the management of Ons Tuiste old-age home in Louis Trichardt have surfaced and are being investigated by the South African Human Rights Commission (SAHRC).

Workers, including nurses employed at the old-age home, claim that they are being discriminated against by their employer. Some of them have worked at the home for more than two decades.

The workers, who wanted to remain anonymous, voiced their complaints to this newspaper. Among the allegations directed at the employer, is the fact that they are apparently not being given time to read through their employment contracts before signing them. “All they do is give you the contract and request you to sign without going through the contract. Most of us are not aware of what the contract entails,” said one of the workers.

They workers also claim that no differentiation exists between the salaries of long-serving and recently hired staff; that the higher-level positions are only offered to white people; that some staff are not paid bonuses; and that ablution facilities are allocated according to race. The workers also claim that they do not receive Unemployment Insurance Fund (UIF) payments from their employer during maternity leave, although the money is deducted from their salaries every month; that the home has insufficient supplies of Covid-19 PPEs as per regulations and that the sleeping quarters for the black employees is next to a rubbish-bin area.

The workers are members of the Hospitality Catering and Farm Workers Union (HOCAFAWU). In response, Mr Justice Nenwedi from HOCAFAWU said that these issues had been escalated to the CCMA last year and that the union was still waiting for the CCMA to come up with another date to finalise the issues.

The above allegations once again came to the fore during a visit to the old-age home by a member of the SAHRC last Thursday. The visit was, however, related to a 2020 investigation regarding similar complaints. In a letter dated 27 October 2020, the SAHRC informed the management of the old-age home that a complaint had been lodged with them by one of their employees, stating that when they employed black nurses, they required a nursing qualification, but white nurses were not required to do the same; that a disparity of payment of salary for the same qualification existed, based on the nurses’ skin colour; that during Level 3 of the lockdown, the home had allowed visitors, thereby exposing all employees to Covid-19 infection; and that the sleeping quarters for black employees were inhospitable.

During an interview with the newspaper on Tuesday, the management committee of Ons Tuiste denied all the allegations levelled against them. They also questioned the timing of SAHRC’s sudden visit, coinciding with Human Rights Month. “This is an old issue. We’ve already responded in writing to the allegations against us as requested by the SAHRC in November last year. Since then, we’ve been waiting to get answers from the SAHRC to at least tell us whether we are guilty of discrimination or not? We answered all their questions in November last year and the answers are pretty clear,” said the management.

On the issue of PPEs, the management stated that none of the staff was ever refused PPEs during the entire lockdown period. “On Friday, we received a visit from the Department of Social Development to check up on our PPEs. Their only recommendation was that we should in future ask the staff to sign for the PPE when they receive it. Some staff members, however, refuse to sign,” said the management.

As for the issue of alleged discrepancies in the payment of salaries, the management explained that they were paying their workers according to what the law states regarding the hourly minimum wage per sector. “Regarding the issue of different pay, there are some who claim they should be paid a nurse’s salary, but they are not nurses as they are not registered at the South African Nursing Council,” said the management.

Regarding the issue of toilets, the management committee again stressed that no segregation existed in this regard. In the frail-care unit, however, one toilet is specifically allocated for the elderly. This is to make sure that a toilet is always available for them as many of them suffer from urinary problems and are unable to control their urine. If they have to go, they have to go immediately. This toilet is clearly marked for the use of the home’s elderly residents only and is directly adjacent three others available to staff. “Last year, we caught one of our staff members using this toilet. All we did was to ask her why she had used this toilet and not one of the others if she knew that it had been allocated to the elderly. Two weeks later, she brought the police to arrest the manager of the home over the incident. We don’t know if the issue about separate toilets relates to this incident. Again, we are waiting for answers from the SAHRC,” said the management. They added that the separate toilet for the elderly residents was also for their protection during the lockdown period.

The management also addressed the issue of the sleeping quarters. They explained that workers were not forced to stay there. “The decision to stay there is voluntary. They converted the available space into sleeping quarters for people having to work late and who would prefer to stay, rather than to go home. There are medical beds and mattresses. We even recently refurbished both the toilets and shower areas. Again, the workers do not have to stay there if they do not want to,” said the management.

Regarding all the other issues, the management said that they had never refused any department access to the facility to investigate a complaint. Regarding this, they have always worked with the authorities in the past to clear up any misunderstandings between them and their staff and will continue to do so. The management stated that this whole issue was nothing more than a labour issue turned ugly. “We have no doubt that this is the actions of disgruntled employees refusing to understand how labour issues work. Why they involved the SAHRC in labour issues, we do not know,” said the management committee. In the meantime, they are awaiting the findings of the SAHRC.