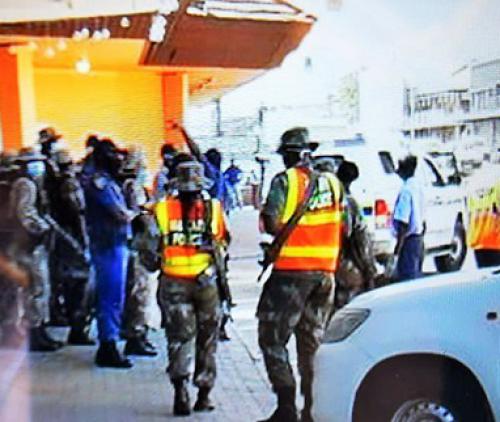 Scores of heavily armed members of the police and military swooped down on residents of Modimolle on Monday to arrest those not wearing a mask or wearing it incorrectly. The Democratic Alliance has since condemned these heavy-handed arrests. Photo: DA Limpopo.

The Limpopo police have confirmed that they had arrested 2 511 suspects in their ongoing joint operations from 9 to 18 January, of which 1 274 were arrested for violating the Level 3 restrictions stipulated in the Disaster Management Act, which included the sale and transportation of liquor and breaking the curfew.

Provincial police commissioner Lieutenant General Nneke Ledwaba applauded the police for their successes and for their endless commitment in the fight against crime. “Members of the community are urged to continue to report all criminal activities in and around their areas and to adhere to the lockdown regulations without fail,” said Ledwaba in a statement. Anyone may call the 10111 number, or the Crime Stop number 08600 10111 or the nearest Police Station or MySAPSApp.

Not all, however, view the arrest of people for non-compliance with the Level 3 lockdown regulations as a success. “The Democratic Alliance (DA) in Limpopo is appalled by the raids conducted in the Waterberg region, specifically in Modimolle, by SAPS and the South African Defence Force (SANDF) earlier today [Monday]. Scores of SAPS members and members of SANDF [military] filled the streets of Modimolle and arrested unsuspecting persons on the pavements who were not wearing masks or were wearing masks incorrectly. Businesses were entered and employees who were not wearing masks were arrested and taken to the police station to be processed,” said the DA’s provincial leader Jacques Smalle in a media statement.

The DA also stated that the arrests were unlawful, arguing that one could only be arrested for refusing to wear a mask in public when instructed to do so by the police or military. “This is confirmed in section 34(2) of the Disaster Management Act, 2002: Amendment of Regulations as Gazetted on 29 December 2020, which clearly states that ‘the wearing of a mask is mandatory for every person when in a public place, and any person who fails to comply with a verbal instruction by an enforcement officer, commits an offence’,” Smalle said. He urged the public, however, rather to wear their masks at all times. “We recognise that the regulations to wear masks in public and to practice social distancing are important measures aimed at countering the further spread of Covid-19. We request members of the public to continue to observe these protocols,” said Smalle. As for those arrested, Smalle said the DA would seek further clarity on the matter by engaging with the affected individuals and stakeholders to compile a factual dossier before seeking legal counsel on how to proceed.

If the actions of the police throughout the past week are anything to go by, residents of Makhado, Thulamela, Musina and surrounds should take heed and start complying with the current Level 3 lockdown regulations.