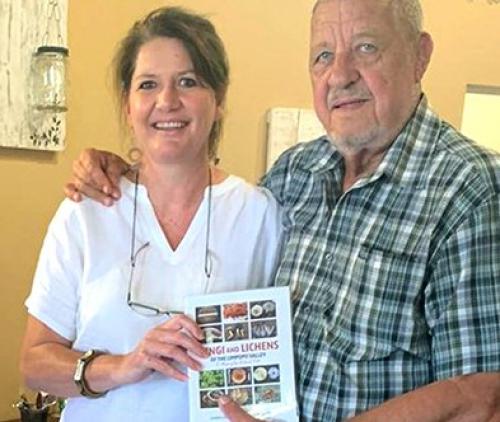 Retha and Tuba van der Walt, pictured with a copy of Retha’s newest field guide, Fungi and Lichens of the Limpopo Valley, which was recently published. Photo supplied.

The culmination of almost a decade of intensive research by well-known citizen scientists Retha and Tuba van der Walt recently saw the publication of a unique field guide focussing on the biodiversity of fungi and lichen species north of the Soutpansberg.

Fungi and Lichens of the Limpopo Valley boasts 1 400 photographs for easy identification of fungi and lichen species specifically found in the harsh, dry climate north of the Soutpansberg. The book is co-authored by Prof Joanna Dames en Dr Greer Hawley-McMaster of Rhodes Universiteit, who assisted in identifying the species. They also did the scientific editing.

Research into these species was undertaken by Retha and Tuba nine years ago as, up until then, these species had largely been unexplored with no research on the topic before. Initially, the research was conducted through private funding and donations, but this all changed when Retha got funding from the National Science Collection Facility (NSCF). “Because all of my samples were recorded in the ‘National Fungi Collection’ at the Agricultural Research Council, the fund allowed for the appointment of experts to identify the samples at their cost. That was just the breakthrough we needed,” said Retha. Some of Retha’s samples were also sent to the Chinese Academy of Science.

Retha is very excited that two of the samples they collected at their farm Ludwigslust turned out to be two new species, namely Chlorophyllum africanum en Chlorophyllum paleotropicum. After further DNA-testing at the Rhodes University laboratory, at least five of Retha’s fungi samples seem to be previously unidentified species. “There is also a lichen species that could represent a previously unidentified species. These species were also included in the field guide,” said Retha.

During the nine-year research period, a total of 350 fungi, lichen, and slime mould species were identified, representing more than 70 families and more than 140 genera. “This is amazing if you take into account that the study was conducted in the dry Limpopo Valley, predominantly in the Musina and Mopanie bushveld,” said Retha.

Although 290 plus species are discussed in the field guide, Retha said that this was just the tip of the iceberg. “Macro-fungi in Africa are not well researched, with less than 5% properly identified and documented. Changes are that readers might stumble upon a species not previously identified. The field guide, however, will serve as guideline to differentiate between the different morphological groups, such as gilled mushrooms, pored mushrooms, brackets, earthstars, stinkhorns, jelly fungi, lichens, etc.” said Retha.

This is not Retha’s first field guide to be published. In 2009, she published the Wild Flowers of the Limpopo Valley. Her commitment to documenting the region’s rich plant-life biodiversity is best described by Michelle Hamer of the South African National Biodiversity Institute and Natural Science Collections Facility in the book’s preface. “The Fungi and Lichens of the Limpopo Valley is a remarkable book because it highlights the important role that citizen scientists can and do play in biodiversity research and conservation and that their contribution can be of a standard expected from professional scientists. It also shows the value of collaboration between citizen scientists and academics and how partnerships like this can be mutually beneficial and make a significant contribution to both the scientific and the popular literature. Several academic publications have resulted from the material that the author has collected, and the fact that the material has been deposited in the National Collection of Fungi at the Agricultural Research Council means that it can continue to be researched in the future,” writes Hamer.

Fungi and Lichens of the Limpopo Valley is a local labour of love in more than one way. The line sketches (of exceptionally high quality) were made by Karin Marais of Mopanie for the picture glossary, while Yolandie Jonker from Yolandie Jonker Graphic Designs (Louis Trichardt) did the layout. Bev Leach from Leach Printers was responsible for the printing of the book.

The Fungi and Lichens of the Limpopo Valley field guide is available from Leach Printers in Louis Trichardt at R380 and can also be ordered directly from the author by sending Retha an e-mail to ludwigslust@xnets.co.za.