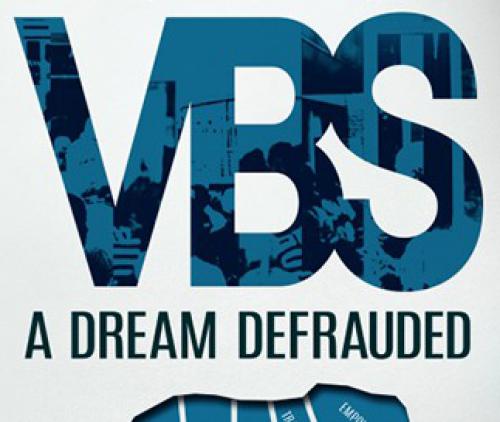 The VBS horror story, now at a bookstore near you

Perhaps, one day, a movie might be made about South Africa’s greatest bank heist. Some famous Hollywood actors could potentially be roped in to play the roles of the protagonists. I can picture a younger Forest Whitaker featuring in the role of Tshifhiwa Matodzi, the man whom advocate Terry Motau described as the mastermind behind the scam.

Unfortunately, the movie will have no happy ending and be classified as a “horror film”, only to be shown to people to illustrate how easily people lose respect for money and how greed can corrupt even the most likeable of persons. The final scene may depict the doors of jail cells closing behind the main characters, while the politicians drive away in their luxury cars to attend another meeting.

In October this year, Dewald van Rensburg’s book, VBS – A dream defrauded, was published - a must-read for those who can stomach 22 chapters of escalating fraud and corruption.

Van Rensburg spends the first few chapters of the book setting the background. He goes into interesting detail of how the “Venda boys” ended up at the (at the time) small VBS Mutual Bank. This was a group of bright young men, studying at the Rand Afrikaans University (now UJ) in the late 1990s.

“After graduating … the ‘Venda boys’ parted ways, spreading out to become part of the first wave of young black professionals defining the new South Africa. Some went on to do articles at major firms in order to attain the sought-after badge of honour of being chartered accounts (CAs). Others set out to establish businesses,” he writes.

In less than three years, the lives of these young professionals got tied up in the VBS quagmire that seemed to be a life of excessive wealth and power. A life where consequences and accountability waned as the cars became flashier. In the end, thousands of people lost out, either directly by losing their stokvel or pension money, or indirectly because money meant for service delivery at municipalities was devoured.

The author clearly had to do a lot of research before starting to write the book. He worked as an investigative reporter for City Press, alongside Sipho Masondo, and they broke the story of the VBS fraud in early 2018. Apart from reading the voluminous reports and affidavits filed in court, he interviewed dozens of the role players to try and reflect their version of events.

Van Rensburg spends a lot of time and effort to explain who the different role players are and how they benefited from VBS. The matter is not as straightforward as it may seem. The role of the caretaker king of the Vhavenda, Toni Mphephu Ramabulana, is especially important. Whether Ramabulana is part of the royal family whom his lawyer, Nkhume Paul Makhavhu, described as “clueless as far as business is concerned”, is debatable. What is clear, however, is that Ramabulana was used as a gateway to VBS. For Ramabulana’s efforts, he received millions in gratuities. His lawyer, Makhavhu, is said to have received over R30 million.

The story of VBS is not a straightforward tale of looting. This is not a story of a group of robbers planning a stick-up and speeding away with the loot. Reading through the chapters, one quickly sees that numerous good ideas had been brought to the table. Perhaps the contract-financing that the bank did was opportunistic, but a gap existed in the market that they exploited. This gave them a sniff of the potential to finance large, and very lucrative, transactions. The plan to partner with the powerful Nazareth Baptist Church and create the Shembe Unyazi Bank of SA may also have worked.

Unfortunately, the role players did not always go about things in the correct manner. The old bank was effectively hi-jacked by the newcomers and the culture of “fictitious money” started. This entailed Vele Investments’ becoming the majority shareholder in the bank, effectively without paying a cent.

The “PIC men”, Paul Magula and Ernest Nesane, also get a chapter in the book. These two were supposed to look after the interests of the Public Investment Corporation (PIC), Africa’s largest asset manager. They were deployed to VBS to act as watchdogs and make sure that the interests of, among others, the government pension fund’s members were protected. Instead, they conveniently looked the other way and were well remunerated for this. KPMGs crooked accountants made their lives a lot easier.

What is almost unbelievable is how quickly the small bank from Vhembe went from near obscurity to being an international player. When the virtually unknown bank announced in September 2016 that it would give the then President Jacob Zuma the R7,1 million he needed to finance his Nkandla debt, very few people had heard about VBS. Less than a year later, in July 2017, a delegation from VBS and Vele flew to London to meet Dr Alvaro Sobrinho, an Angolan banker and reported billionaire. The plan was for Sobrinho to buy shares in Vele and ultimately launch VBS into the international banking arena.

For all of this to happen, VBS needed money - a constant flow of money. The bank found this partly in municipalities. The flow of municipal deposits to the bank was encouraged by powerful politicians such as the ANC’s treasurer in Limpopo, Danny Msiza. Between 2015 and 2018, municipal deposits of R3,4 billion and withdrawals of R2,3 billion, involving 20 different local governments, were made.

In February 2018, Vele Investments believed that it was exploring new heights, with the launch of Vele Financial services. “In a year’s time, we will not be talking about handling R40 billion, but about handling R300 billion,” said the group’s new CEO, Robert Madzonga. VBS even tried to get its hands on the funds of the National Student Financial Aid Scheme (NSFAS). The biggest “fish”, however, was the Passenger Rail Agency of South Africa (PRASA), where the bank hoped to secure a R1 billion deposit.

The only problem was that the ponzi scheme started to crumble. As is the case with ponzi schemes, a continuous supply of money is needed to feed the scheme. With national treasury putting the brakes on municipalities’ spending, feeding the beast became increasingly difficult. Too many people were eating at the trough, which included municipal officials who had to get their bribes and politically connected persons who received millions in loans, most of which were never properly recorded. Money was leaving the bank at a much faster rate than new depositors could be lured.

In March 2018, everything came to an end when the bank was placed under curatorship. Van Rensburg’s book is a very valuable resource in this instance. He provides a lot of detail as to why the SA Reserve Bank (SARB) acted and the dirty games that were played, which also entailed getting political parties such as the EFF to join the campaign to discredit the SARB.

The final chapters will probably play out in real life in the next year or two. Just after the book was published the first jail sentence was handed down. Philip Truter, VBS’s chief financial officer, is already serving part of his ten-year sentence. The other accused are waiting in line for trial. More arrests of the people involved are expected.

VBS - A dream defrauded should be compulsory reading for anyone in the accounting industry and those involved in management. It presents a scary reflection on what happens when board members neglect their responsibilities and gives valuable insight on the extent of the corruption at municipalities, government departments and especially a completely broken party-political system. The checks and balances expected, such as auditors with integrity, are not there.

The story of VBS Mutual Bank is also about how something that was small, precious, and very much a part of the life of the Vhavenda people, was corrupted in a relatively short space of time, mostly because of greed. This caused misery to many poor pensioners and the effect of the looting will be visible in the Vhembe District for many more years to come.

VBS – A dream defrauded is published by Penguin Books and is available at most leading bookstores. Online it retails for around R280 but is currently available on Takealot.com for R189.