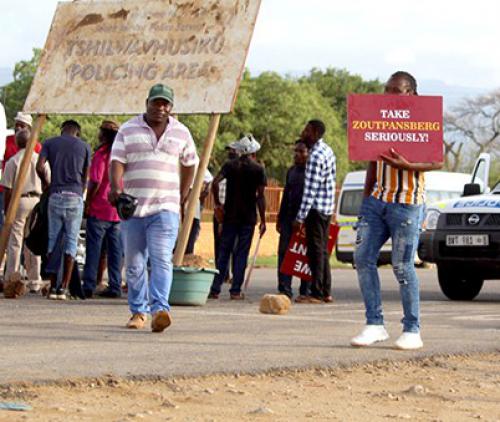 Protesters started to barricade roads leading to and from the area since early on Monday morning.

Commuters from the Sinthumule and Kutama areas were left stranded on Monday morning when protesters barricaded the D959 and D3715 roads leading to the area. The shutdown has been organised by the Zoutpansberg Community Development Forum (ZCDF).

The reason for the protest action is given as a general unhappiness about service delivery in the region. Protesters are complaining about a complete lack of water and electricity and the abundance of potholes in the two roads. The residents rely on Makhado Municipality for the supply of electricity and on the Vhembe District Municipality for the supply of water. They complain that electricity interruptions happen almost daily.

Thousands of commuters were left stranded and many workers did not report for work because of the barricaded roads. Shops in the area were closed for most of the morning. The protesters were blocking off roads, using stones, and they actively prevented motorists from getting past.

The latest information indicates that groups of protesters will travel by bus to the Louis Trichardt show grounds. A protest march to the municipality is planned to start at 10:00.