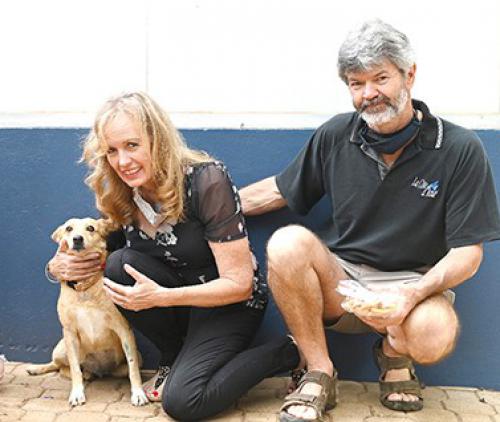 Adira has become somewhat of a celebrity the last couple of weeks. She was adopted by Michelle (middle) and Petrus Pretorius (right) from Pretoria, who came to take her to her new forever home last Friday. Left is Hayley Waller, who acted as foster parent to Adira while the adoption was finalised. Photo supplied.

A new forever home for Adira, just in time for Christmas

Members of the Louis Trichardt SPCA are thrilled that their sweet Adira has found her new forever home, just in time for Christmas!

“By now, Adira needs no introduction, as her story has been shared far and wide. Her initiation into the life of celebrity came from our local paper (the Zoutpansberger) after she was found in the forestry area, bound with multiple cable ties - left to die a slow and agonizing death…” said Lesley Gaigher, local SPCA chairperson.

Lesley said they were incredibly grateful that a group of cyclists had been on that route that fateful morning. “They alerted us to her peril and member Antjie Brennan was on the scene within minutes to free her and take her to the SPCA. Antjie chose the name Adira, fitting for this strong and noble girl who escaped certain demise,” said Lesley.

For the first few days, Adira was almost completely shut down. Exhausted, famished, wounded, and dehydrated - she had a lot of recovery to do before they could think of starting to look for a new home for her. “Thankfully, the Waller-family took up the reigns to look after her in that time - ensuring that her body, mind and spirit were fully healed!”

Lesley said that when the day finally arrived for them to get Adira ready for a new home, another two publications (Maroela Media and the Beeld) had picked up on the story and this guaranteed that they had no shortage of remarkable homes to choose from. “We narrowed the applications down to our top three picks, and the entire committee weighed in on the decision to place her with the Pretorius family in Pretoria,” said Lesley.

Michelle (Pretorius) was extremely eager to make Adira a part of their family. “I’ve never before seen such commitment to making it happen!  On the day she saw the posting, a terrible storm hit their home in Magalieskruin. She was unable to print the application form to complete it, but Michelle typed the entire document, with her answers, on a WhatsApp message - now that shows dedication!” said Lesley.

Lesley thanked the Tshwane SPCA for their help in making this adoption possible. “Without Inspector Carlos, who went out of his way, we would not have been able to process their application,” said Lesley.

Michelle and husband Petrus came to collect Adira on Friday, 4 December, precisely two months after she was found. “Looking back at those first pictures [when she was found], it’s hard to think she is the same cowering girl. Although Adira is still a bit shy, she is willing to let people see into her cheerful soul, giving them glimpses of her full potential,” said Lesley.

As a farewell to Adira, the whole SPCA team whished her and her new family a joyful Christmas. “May your walls know joy, every room hold laughter and the windows be open to possibilities!” said Lesley.