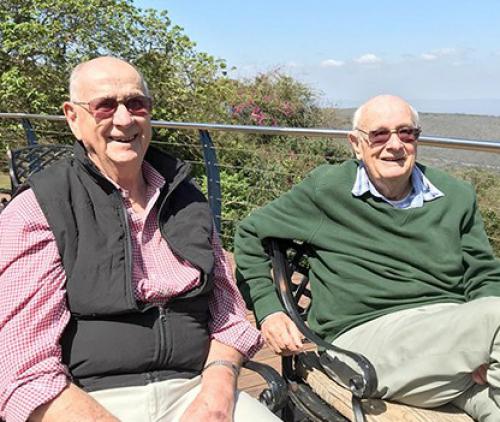 Friends since childhood Peter Henning (left) and Peter Knott (right) who both passed away over the weekend within ten hours of each other. Photo supplied.

Soutpansberg bids a sad farewell to its two Peters

The Soutpansberg bade a sad farewell to its two well-known Peters, who passed away over the weekend within 10 hours of each other. The 84-year Peter Knott died on Friday, with the 80-year-old Peter Henning passing away on Saturday. The two were both born in Louis Trichardt and had been friends since childhood, also studying together at St John’s College in Johannesburg.

Peter Benjamin Knott died on Friday, 27 November, at his home in Louis Trichardt, surrounded by family.

Peter was born in Louis Trichardt. After completing his schooling, he started farming with his father, the late Herbert Benjamin Knott, in the Soutpansberg district, Alldays, Tshipise and then Southern Rhodesia. In 1960, he married Maureen Knott (née Hacksley) and the couple celebrated their 60th wedding anniversary shortly before his passing.

Peter farmed with citrus, avocados, macadamias, cattle, and game on various farms in the Soutpansberg district. As an avid conservationist and hunter, he established Greater Kuduland Safaris after converting his cattle ranch into a game reserve in 1974. A pioneer in the industry, Peter held the very first game auction in South Africa that same year after successfully introducing plains game species onto the reserve, including kudu, gemsbuck, red hartebeest, giraffe, eland, and wildebeest. The first clean herd of Cape buffalo was introduced in 1976, followed by the white rhino in 1977 and roan antelope in 1988.

“Peter lived a full, prosperous and exciting life and has left behind an incredible legacy of honour, determination, respect, gratitude and love, that will never be forgotten. A true gentleman that will be sorely missed,” said the family.

A memorial service will be held for Peter at the Agapé Church in Louis Trichardt at 11:00 on 4 December. He leaves behind his wife, Maureen, their four children Howard, Denise, Lindy and Wendy, along with his 13 grandchildren and two great-grandsons.

Peter Henning passed away peacefully in the early hours of Saturday morning, after a short, fierce battle with pancreatic cancer.

Peter was born at Elim Hospital and grew up on the farm Sweetwaters with his elder brothers, Poog and John.

His schooling to Standard 5 (Grade 7) was at Laerskool Louis Trichardt, then he matriculated at St John’s College in Johannesburg. He spent the next three years at Tuks, studying Law. Before finishing, he left for Sweetwaters to take charge of the dairy.

His application and interviews in Rhodesia were successful and he was awarded a sugar farm in 1965 with a guarantee of £8000 from his father. In November of that year, UDI (Unilateral Declaration of Independence) was declared, cutting his sugar quota because of sanctions. In 1967, he ploughed up half of the new sugarcane for cash crops. Four years later he bought the neighbours’ property in a 50% partnership with his brother John.

In the same year, the bush war accelerated in the South Eastern Lowveld and in the latter part of 1977, a large Joint Operational Command was set up at Buffalo Range Airport. Peter later became a Flight Lieutenant in charge of the Air Force Reserve.

In 1979, he relocated his family to Louis Trichardt in order to assist in persuading the South African government not to appropriate the family farm. He simultaneously purchased Masapas Ranch 80km north of Chiredzi (Zimbabwe) for cattle. It subsequently became a game property.

After a two-year drought in the Lowveld and after the three children had completed their schooling, Peter moved back to Chiredzi in 1994, where he was instrumental in establishing the Save Valley Conservancy, contributing to its early development and formation, being the largest private wildlife conservancy in the region.

In 2000, the farm invasions began and finally he was pegged for A2 squatters in 2004. After many successful court cases, the family managed to stay in the homestead until 2009, when they were forced to return to South Africa or face arrest for staying in his property/homestead “illegally”.

The family returned to Louis Trichardt, fighting for justice from afar, returning every six weeks to the Chiredzi Magistrate’s Court for three years to remain in the homestead. In December of 2012, he was sentenced to $100 or 2 weeks in jail.

Peter continued to fight tirelessly for justice and was currently waiting for the outcome of a court case against the South African government (regarding the expropriation of his farm in Zimbabwe) held some three weeks ago in the Pretoria High Court. The outcome is still pending, and the family are trusting for a favourable ruling.

A memorial service will be held for Peter at the Agapé Church in Louis Trichardt on Saturday, 5 December at 11:00. He is survived by his wife Moraig Henning, son Greig Henning, daughters Liesl Biehn and Bronwyn Henning and granddaughter Caitlin Biehn.