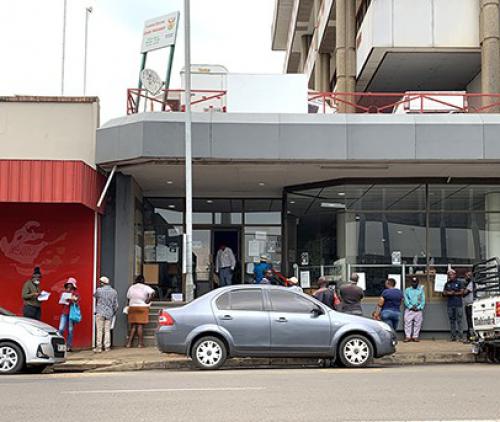 The Department of Labour’s office in Louis Trichardt.

Poor service delivery at government institutions is something that residents of Louis Trichardt have been fighting against for so many years now that they have long since accepted it with resignation.

The lowered standards of the once proud civil service have apparently become the norm and have given officials at these institutions full right not to offer anything more than what residents now have to be satisfied with. In fact, the general feeling among the bigger part of the community seems to be that service delivery by government officials just keeps deteriorating, and people are fed-up.  Not so much because duties are performed with so little pride, but because of the gruelling discomfort it creates in people's daily lives.

“Something has to be done,” frustrated residents complain. However, the question is when someone will take responsibility to not only address poor service delivery but do something constructive about it?

The Department of Labour’s office in Louis Trichardt takes the spotlight this week after a resident had been trying for more than three weeks just to get assisted at this office.

Kyla Hopkins gave birth to her baby on 8 October this year and had to apply for a maternity grant for the period of her maternity leave. She said she had been told to come back later for three weeks, because the officer who had to assist her was not there, or their system was offline, or the whole team was having lunch outside with no-one assisting the public inside.

“The worst part is that, every time I had to go back, I had to take my baby with me because they required ‘proof’ that I had really given birth to a baby, even though I had the birth certificate to show,” she said.

On Tuesday, 10 November, Hopkins went back once again with the hope that she might actually make progress. However, when she got there, the security guard told her that the office was closed “because the government doesn’t supply them with a cleaner”.

At that point, Hopkins decided that enough was enough and came knocking on the newspaper’s door.

The Zoutpansberger spoke to the provincial communications officer for the Department of Labour, Lerato Mashamba. She confirmed that the department’s office in Louis Trichardt was still closed on Friday, 13 November, due to "internal issues" and apologized to the public for the inconvenience. She could not elaborate on what these issues were. On Monday, 16 November, the office was operational again.

Regarding Hopkin’s complaint of being sent back and forth for weeks with her baby without being assisted, Mashamba said that she could only sincerely apologize to Hopkins on behalf of the department. “That is not how the department operates,” she said. According to Mashamba, for officials to require a baby as "proof" when someone applies for maternity benefits was "not the norm".

"It is either that or a birth certificate. Departmental officials are familiar with the processes and procedures. There could have been some misunderstanding between the client and the alleged official who was assisting her," she said, but gave her assurance that the situation at the Louis Trichardt office would be investigated.

The department encourages the public to utilize their online services at www.labour.gov.za. Those who want to check their UIF status can contact 0800 843 843. To report fraud regarding the Covid-19 Temporary Employment Relief Scheme (TERS) for claimed funds that have not been received, the following number can be called: 0800 212 799.