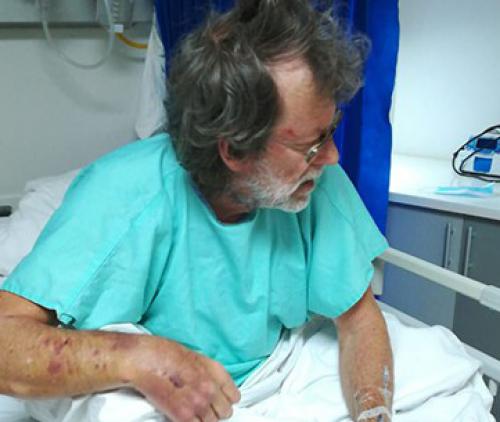 The 65-year-old Wally Schultz, well-known local resident and environmental activist, suffered a massive stroke on 30 October. Although he was discharged on Friday, he still requires intensive medical treatment. At present he is staying with his sister, Delene, in Louis Trichardt. Photo supplied.

Wally has a long road to recovery ahead

A long road to recovery still lies ahead of well-known local environmental activist and Soutpansberg resident Wally Schultz after he suffered a massive stroke on 30 October.

The 65-year-old Wally was taken to the Louis Trichardt Memorial Hospital as he had no medical aid, but was, according to the family, discharged without being treated. The family was then left with no other option but to take him to the Zoutpansberg Private Hospital. Here he was diagnosed as having suffered a possible stroke and Wally was transferred to the Netcare Pholosa Hospital in Polokwane, where he could be assessed by a neurologist. Wally had indeed suffered a massive stroke on the left side because of a blockage that is taking up a third of his brain. At that stage, more than eight hours had elapsed since Wally had suffered the stroke, making his changes of a full recovery less likely.

Some good news is that Wally has since been discharged from hospital, although he is definitely not out of the woods yet. “He was discharged on Friday [6 November]. At present, he is staying with me while recuperating. He is doing okay, but his speech was severely affected by the stroke and he suffers from aphasia,” said Wally’s sister, Delene. Aphasia is a condition that robs a person of the ability to communicate. It can affect a person’s ability to speak, write and understand language, both verbal and written, and aphasia typically occurs suddenly after a stroke or a head injury. “So, his brain is 100%, but he struggles to communicate what he is thinking,” added Delene.

According to Delene, only time will tell whether her brother will completely recover. "We need to get a second opinion. He will definitely need more treatment and will most likely be going to recover with his family in Somerset West very soon. He might even need an operation, so he really does have a long, hard road of therapy ahead of him,” said Delene. This is a difficult time for both Wally and his family. “It is very frustrating for him and at times he gets very difficult,” said Delene.

The specialist treatment that Wally requires does not, however, come cheaply. To assist it in paying the medical bills, the family set up a fund via the Click ‘n Donate website. The site can be visited by clicking on the link: https://clickndonate.com/wally-schultz-stroke-recovery-goal-r-500-000/

The goal of the fund is to raise the R500 000 that will possibly be needed for Wally to recover fully. By Monday, the fund was nearing the R100 000 mark. “Please support the fund. It would really help a lot,” said Delene. The rest of the family added: “Wally is known fondly in the community as someone with a true warrior spirit and as a passionate and eloquent advocate for the environment and the local communities. With the support of those who love him and value his efforts, Wally will be able to get the treatment he desperately needs in order to have any chance of recovery and getting back to his old, energetic self, and the important work he is tirelessly dedicated to: saving the Limpopo Valley eco-system and heritage, training and activating the youth to fight for the future of our beautiful planet. Thank you so much for your help; every little bit helps.”