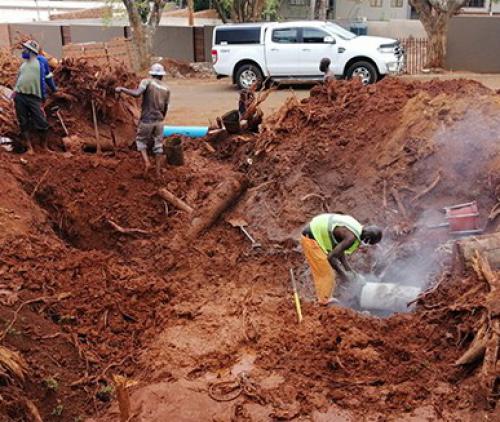 A resident in Bergh Street was told by the VDM to “fix the problem” himself, following a massive pipe burst that saw million of litres of drinking water go to waste. Photo supplied.

The apathy and lack of urgency displayed by the Vhembe District Municipality (VDM) in attending to water and sewage problems in Louis Trichardt is becoming of increasing concern to residents. The past week, a resident was even told to fix a broken main water-supply pipe himself.

Residents’ frustration with the VDM is clearly visible on several local social media platforms and the past few weeks the Zoutpansberger has been inundated by complaints about poor to no service from the VDM. Some residents are now openly questioning whether any need for the VDM still exists as the only service they are rendering seems to be lip service. Many residents are also infuriated by the mess left behind by VDM workers when they eventually do respond to problems.

One such complainant is Ms Josie de Lange from Vorster Street. She is in the unfortunate situation that a sewage pipe runs underneath her property’s outside wall. Therefore, every time a blockage needs to be opened up, her fence must be taken down. “This causes a serious safety risk for me. Last week, they spent three days fixing a sewage blockage. The previous time was at the beginning of August. While they were busy, my property was basically left unprotected and people broke into my house both times,” said De Lange. She added that she had informed the municipal workers that she would not allow her fence to be taken down again. “For all I care, the people causing the blockages can drown in their own sewage,” said De Lange. She was referring to those people who still have not learnt how to use a toilet, using it to flush down sanitary pads and even baby diapers. “You should see what they take out of the system each time!” said De Lange. With all the “fixing” of blockages, her garden is really the worse for wear. She has also lost massive palm trees in the process, while the area opposite her property now resembles a dumping site. “They say they will come and remove the rubble, but they never do,” said De Lange.

Reverent Jan Pretorius has also been at odds with the VDM the past couple of weeks. He reported a massive water leak in front of his home in Forestry Road in September. Despite numerous follow-ups and even personal correspondence with senior VDM staff, the massive leak was only finally fixed last week. Apart from the fact that VDM took a month to fix the problem, Pretorius also questioned their work ethics. “My question is this: People spend thousands of rands on their sidewalk gardens and driveways. Then Vhembe comes in, digging everything up and leaving a mess when they depart. Who is responsible for the damages? Why can’t they leave a sidewalk as they found it?” Pretorius wanted to know. “But we are just happy that they fixed the water supply. This just shows how much we as a society have decayed - that we are happy with something so small,” said Pretorius.

In both De Lange and Pretorius’s case, their problems were fixed fairly quickly, relatively speaking (a few weeks). Others are not so lucky.

Mr Jorrie Jordaan of J&N Motors has been forced to work amidst a sewage cesspool at his business premises in Krogh Street from just before the lockdown in March. “We’ve reported the blockage numerous times. Every time I am told that the problem is on my side. But it is not! The sewage is backing up all the way from a blockage lower down in the municipal line,” said Jordaan. He says the stench is unbearable, especially now. “Once or twice they apparently sent out people to remove the blockage with rods lower down. A day or two later, the problem is back. They never fix the problem,” said Jordaan.

Local businesswomen Rina de Swardt has been struggling with a chronic sewage problem at her group of flats in Ruh Street since July last year. “We never had a problem until July last year, when sewage started flowing out onto the premises chronically. I have reported the matter numerous times and have spoken with several officials. All promise to do something, but the problem persists. The last time I told them I wanted a date when the problem would finally be fixed. I do not have time to wait around forever. I will start losing my tenants. Otherwise, I told them, I will get ‘n contractor to fix the problem and send them the bill … you just don’t get any service. Maybe it is time we also started burning tyres,” said De Swardt.

Most shockingly, the VDM now appears to be holding residents responsible for fixing water leaks and damage to water and sewerage pipes.

A resident of Bergh Street reported a water leak on his premises on Sunday to VDM. He was apparently duly instructed by an official from the VDM to first find out whether the problem was on the municipal system or on his own property. He was left with no other choice but to dig up his own garden with a TLB to look for the problem. In the process, he had to remove a massive tree whose roots had damaged the main supply pipeline from the Bergh Street reservoir. Consequently, millions of litres of drinking water went to waste.

Most shockingly, the homeowner was then informed by an official from the VDM that since he had broken the pipe, he must fix the problem at his own cost. The homeowner ended up having to purchase a piece of replacement water pipe and hiring a private contractor to repair the VDM’s main supply line.

All of this happened on Tuesday. Local DA councillor Brian du Plooy was on site. “Vhembe just stood back. It didn’t matter if residents had water while the homeowners struggled to get the problem fixed,” said Du Plooy. He ended up having a massive argument with a Vhembe official. “He told me that he cannot talk to me because I am a politician, instead of debating how we can work together to solve the problem,” said Du Plooy.

From the above one can clearly see that the VDM’s service delivery is going from bad to worse, and answers are few and accountability is non-existent. Rumour also abound that VDM has run out of money, thus the delay in attending to problems. Just over two weeks ago, the Zoutpansberger sent questions through to the VDM regarding the above. The newspaper wanted to know:

* Is there any truth to it that Vhembe has no more money left to fixed burst water pipes and sewage spillages?

* What is Vhembe’s total budget for sewage and water maintenance for 2020/21 and how much of that is already spent?

* It is a fact that Louis Trichardt’s dilapidated sewage system is outdated and unable to cope with the higher sewage volumes due to growth. Does Vhembe have a plan on the table to address this issue in the near future?

* The same goes for the water supply system in town. Does Vhembe have a plan on the table to address this issue in the near future?

* Why does it take so long to fix water leaks in Louis Trichardt, such as the one in Forestry Road, after being reported?

* Why is it taking so long to resolve the sewage problem when reported?

Since submitting the above questions, the newspaper has been sent from pilar to post regarding a response. Follow-up requests for comment are merely met with a “we are waiting for a report” or “the matter has been referred to the relevant department”. On Wednesday morning, the Zoutpansberger did eventually get a hold of municipal spokesperson Mr Matodzi Ralushai. He again confirmed receipt of all the above questions, as well as the follow-up questions concerning the allegations about the Bergh Street incident. He promised to reply but had yet to do so at the time of our going to press. True to form, VDM appears to handle media enquiries with the same “urgency” that they deal with fault reports.

The sewage cesspool behind Mr Jorrie Jordaan’s business in Krogh Street. He has been struggling with the VDM since the beginning of the lockdown period to fix the problem, to no avail. Photo supplied.