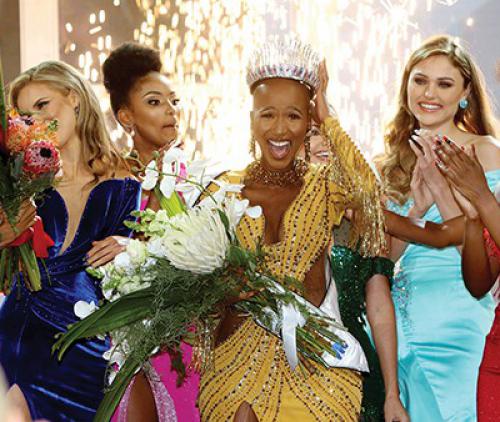 When the 24-year-old Shudufhadzo Musida was crowned as the most beautiful girl in South Africa on Saturday, the Vhembe region could not be prouder. The girl from Vhangani village next to Ha-Masia leaped into the hearts of millions of people, not only because of her stunning beauty, but also because of the warmth of her personality.

“It took an entire village to get me here, and I would like to thank all of you for being my village. I stand here today as your Miss South Africa with immense pride and joy to be representing such a beautiful nation – one of the first Venda women, but certainly not the last - to become Miss South Africa,” she said in her acceptance speech.

Shudufhadzo’s mother, Thandi, is a real-estate agent and she has a 13-year-old sister, Zwonka. Her mother was lucky enough to be able to be present in Cape Town when Shudufhadzo was crowned.

Musida received the nod from the panel of judges not only because of her beauty. She very obviously has a sharp intellect and a passion to effect real change in the world. She has a Bachelor of Social Sciences degree in philosophy, politics, and economics that she obtained from the University of Pretoria. “I am currently pursuing a BA Honours in international relations at the University of Witwatersrand,” she told the judges. She currently stays in Randburg while studying.

Shudufhadzo believes that beauty pageants still play an important role in society. “[Pageants] also evolve with the times, so it’s no longer just a showcase of a woman’s beauty but the beauty of her mind too and how she can be of service to others beyond herself.”

Her message to young girls and young women in South Africa is very simple:

“Love yourselves first, fight for what you want and for yourself too. But remember, fighting doesn’t always have to be loud or vocal – it can be as simple as being silent and choosing to prioritise your peace.”

Shudufhadzo received much more than just a glittering crown and a sash on Saturday night. She will receive R1 million in cash as well as a further R2 million worth of sponsorships and prizes, including the use of a luxury Sandton apartment and a Mercedes-Benz cabriolet for a year. The first runner-up in the competition was medical doctor Thato Mosehle (25) from Klerksdorp in the North West. Second runner-up was Natasha Joubert (23), a B Com graduate from Pretoria.