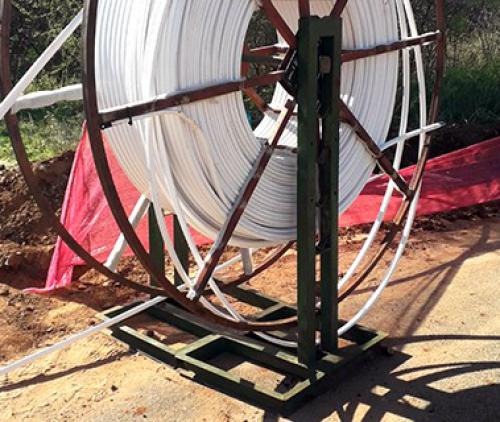 The high-speed fibre-optic to be installed. Photo supplied.

Residents will soon enjoy the pleasures of fast and reliable Internet at their homes as more than one company has indicated their intention to install a high-speed fibre-optic Internet network for residential use in Louis Trichardt.

One of these companies is Vumatel (Vuma), with Britelink as their implementation company, who held a public information meeting in this regard on 12 October.

Vuma announced that Britelink would be installing a fibre-optic network in the Louis Trichardt/Makhado area. This will entail trenching work to be done on road verges and pavements. They assured the public, however, that all safety precautions would be taken regarding pedestrian safety and that all surfaces would be repaired to their original condition prior to trench work. Vuma said that trenching would start in October and that they estimated the project to be completed across the whole area by the end of December this year.

What must be said at this stage is that Vuma is not a service provider. They merely supply the infrastructure, known as an open-access fibre network, for Internet service providers to use. In this case, their fibre optic network will offer guaranteed Internet speeds of between 10 megabytes per second (Mbps) and one gigabyte per second (Gbps). The open-access nature of the network prevents the duplication of infrastructure and drives down prices for the end-user. It also offers Internet users a month-to-month subscription package with no need for lengthy service-provider contracts.

“We do metropolitans. Once that is done, we start with what is called secondary cities like Louis Trichardt. At present, we are busy with the secondary city rollouts. That consists of Tzaneen and Mokopane, where we are currently busy, and obviously Louis Trichardt is our next project,” said Mr Grant Small, implementation manager for the project, during an interview on Tuesday.

At present, most of the preparation work for actual digging to start has already been completed. This is evident from the road markings seen across Louis Trichardt as part of the mapping process to indicate where trenches for the fibre-optic cables will be dug.

In total, Small said, their network would cover 122 street blocks in Louis Trichardt, excluding the central business areas. Irrespective of whether homeowners plan to make use of the network, connection points will be established at 2 125 premises in town. This is a massive project, with a total of approximately 92 kilometres of fibre optic cable to be laid down in town.

Small said they were eager to begin and were just awaiting final approval from the Makhado Municipality to start. This includes determining exactly where all underground cables and pipes are situated. If something should go wrong with the digging, they will be quick to react. “We fix all problems ourselves. We do not wait for the municipality to come out. The only instance where we will wait for them, is when we damage anything above an 11 kVA cable,” said Small. Having said that, Small invited members of the public to phone him directly, should they experience any problems relating to the digging of trenches at their residences. He can be contacted at Tel 082 563 5409.

A similar project involving the installation of a fibre-optic Internet network is planned by well-known local service providers Letaba Wireless.