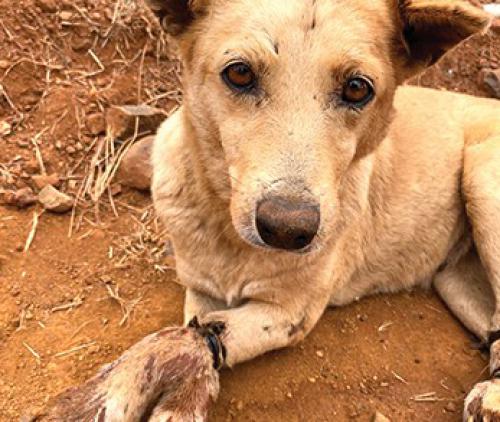 Scared and tired … Cyclists found this female dog in the Komatiland forest just outside Louis Trichardt on Sunday with her front and hind legs tied together with cable ties. Photo: Louis Trichardt SPCA.

Is the justice system failing our furry friends?

Mahatma Gandhi once said that the greatness of a nation and its moral progress can be judged by the way its animals are treated. Judging by the number of recent acts of extreme animal cruelty in the Soutpansberg it would, however, seem that some of our nation’s citizens have no moral compass.

In yet another shocking display of extreme cruelty, a local dog owner decided to get rid of his (or her) dog by strapping its front and hind legs together with cable ties and dumping the dog in the bush in the Komatiland forest just outside Louis Trichardt. Fortunately for the dog, she was found by cyclists out mountain biking on Sunday, who alerted the Louis Trichardt SPCA. “It would seem that the dog was not there for long before being found and we were able to free her in time,” said local SPCA inspector Lawrence Khodobo. Khodobo was left outraged that a person would do something so cruel. “If she had not been found, she would surely have starved to death. What an inhumane way to die!” said Khodobo.

Last month, Khodobo was also called to Musina after a woman spotted three young boys walking in the street with three young puppies. One of the puppies was crying continuously and, upon closer inspection, the woman saw that both the crying puppy’s ears were bleeding profusely. When the woman asked what had happened to the puppy’s ears, the young boy told her they had cut them off with scissors. Apparently, this practice is called “cropping” and is done to make dogs, in this case a crossbreed between a Boerboel and Pitbull, “aesthetically more pleasing”. “People need to understand that the removal of a dog’s tail (docking) or the cropping of ears is illegal. The worst part is they [the boys] did not even administer an anaesthetic when cutting off the puppy’s ears,” said Khodobo.

The woman then urged the boys to bring the puppy to her home for medical attention. On 12 September, they returned, and the approximately eight-month-old puppy was taken to Savuti Veterinary Services. There they found that almost half of both the puppy’s pinnae (outside part of the ear) had been cut off. The wounds were inflamed and covered in dirt and blood.

Khodobo said that he was left with no option but the lay a criminal charge of animal cruelty against the young dog owner from Matswale Extension 9, Musina. The SPCA also confiscated the puppy after this young owner surrendered it to the SPCA.

What will become of the case remains to be seen. Khodobo said he was left frustrated as the justice department did not seem to be taking cases of animal cruelty very seriously. To demonstrate his point, he referred to Nugget’s case earlier this year, which many readers will remember. Two young residents were charged with animal cruelty in term of the Animal Protection Act 71 of 1962 after they had fed Nugget, an adult Jack Russel, alcohol on 4 March. The severely intoxicated Nugget started suffering seizures, which prompted a member of the public to notify the local SPCA, who in turn went out and confiscated Nugget.

One of the young men opted to turn “state witness” against his friend and the case proceeded without him. Despite compiling a comprehensive docket for court, Khodobo was shocked to find out that the Louis Trichardt Magistrate’s Court had withdrawn the case without his even knowing it. “I went to the public prosecutor to find out why they just withdrew the case and was told that, because the accused is a young offender (18 years old), they decided to rather subject him to an adult diversion programme,” said Khodobo. Such programmes entail meetings with a social worker to try and rehabilitate an offender’s behaviour. “How can they just refer it for diversion? For me it was like he got away with it. There was no punishment,” said Khodobo.

Another example of how the justice system is failing them, said Khodobo, was the case involving a 42-year-old woman from Manavhela village who was also charged in term of the Animal Protection Act. Mushayathamba Doris Nkhumeleni was charged with animal cruelty in February this year after hacking a donkey belonging to a fellow resident of the village with a sharp object. The donkey’s injuries were so severe that the SPCA had to destroy the animal. Nkhumeleni pleaded guilty to the charge on 24 July this year in the Tshilwavhusiku Magistrate’s Court. She was sentenced to a mere R400 fine or two months’ imprisonment, which was wholly suspended for two years on condition that she does not contravene the Animal Protection Act again in that period. “Again, this was not punishment. That donkey helped to provide its owner with his daily bread. The donkey itself was worth about R2 000,” said Khodobo.

Khodobo urged members of the public to report all forms of animal abuse. “If you have got a dog which you don’t want anymore, just notify us or bring it to the SPCA. Don’t just go and throw it in the bush,” said Khodobo. He assured members of the public who report animal abuse that the information will be treated confidentially. He also reitereated the fact that surrendering an animal that one cannot look after anymore is free of charge, so people need not be concerned that doing so will put them out of pocket.

On a positive note, the young puppy whose ears were cut off has found a new and loving home. His new owners named him Brave. Nugget is also enjoying a new life with a loving family. At the time of our going to press, the dog found in the Komatiland forest on Sunday was still receiving attention at the SPCA’s kennels. Kennel staff have named her Adira, a name of Hebrew origin meaning “strong”. An anonymous donor has also offered a R1 000 reward for anyone supplying information that can lead to the successful prosecution of the person responsible for dumping Adira in the bush with her feet tied together with cable ties.

Persons who can assist with such information can phone inspector Khodobo at Tel 082 965 515. He can also be contacted for all other SPCA-related issues, including reporting cases of animal abuse.

The approximately eight-month-old Boerboel/Pitbull puppy who had almost half of both its ears cut off with scissors to make it “aesthetically more pleasing". Photo: Louis Trichardt SPCA.