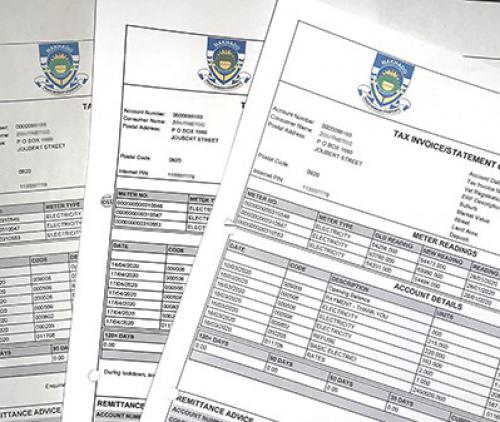 We are not using wrong tariffs, says municipality

Is the Makhado Municipality deliberately ripping off consumers by forcing them to pay inflated monthly electricity bills? This was the question asked by the newspaper last week. According to the municipality, they are not.

The newspaper reported last week on how the municipality seemingly frequently neglects to take monthly electricity readings at homes and businesses, sometimes for up to 90 days. They then take a reading again for the entire period and charge the consumer for the combined reading. This results in electricity consumption’s being grossly inflated, with consumers being charged on a higher kWh (kilowatt-hour) rate.

This is where residents’ concerns come in.

Many argue that if the municipality skips a meter reading for a month or two, the consumer with an average residential electricity consumption of (for example) 900 kWh per month, could end up with a combined electricity bill of 2 700 kWh. If no adjustments are made to allow for average use in the different tariff “blocks”, the consumer could end up paying R52,98 for the first 50 kWh (Block 1), R411 for the next 300 kWh (Block 2), R484,30 for the next 250 units in Block 3 and a massive R4 853,10 for the remaining 2 100 units, bringing the total bill to R5 801,38. If monthly readings were taken, the consumer (with an average of 900 kWh) would pay exactly the same for the first three tariff blocks, but only R693,30 in Block 4 for a total monthly account of R1 641,58. If you multiply this average monthly account by three months, the total is R4 924,74. This is R876,64 less than the account where no readings were taken for three months.

At least two residents took the time to meticulously calculate their “losses” due to “wrong” calculations. Louis Trichardt resident Duncan Campbell calculated that he paid R555 too much the last couple of months for a family of two. Another Louis Trichardt resident, Johann Hammann, declared a dispute with the municipality after calculating that he had been overcharged by R1 500 over two months.

According to Bobodi, adjustments were made on accounts that were affected by incorrect billing. “The municipality has already embarked on a program of replacing conventional meters with prepaid ones, at no costs to the consumers, which will eventually result in the reduction of the number of queries or complaints about meter readings,” said Bobodi.

In cases where a meter cannot be read, Bobodi said, an estimation based on the average consumption of the previous three months would be used to determine the billing for the month. “However, efforts are made to ensure that actual readings are taken in order to correct the estimated average readings,” said Bobodi. He added that only consumers who were overbilled and had made payments based on the overbilling would be refunded if they had a credit on their account.