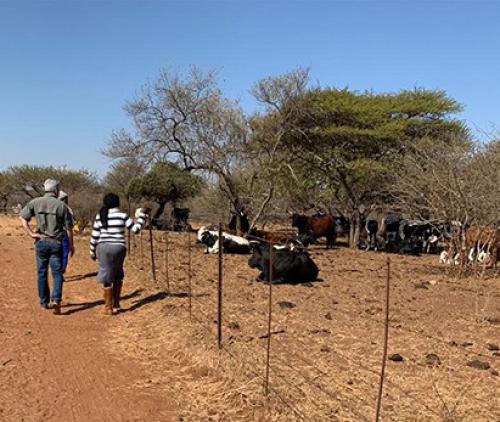 Conditions at the research station were pushed to the fore when the station reportedly experienced an unprecedented increase in stock theft during July, with 102 cattle being reported missing. Following news of the deplorable state of present-day Mara Research Station, the Democratic Alliance’s provincial spokesperson for agriculture, Mr Jacques Smalle, conducted an oversight visit to the station. Photo supplied.

All is definitely not well at the Mara Research Station, but the situation will hopefully change for the better soon through the intervention of the provincial Department of Agriculture and Rural Development (LDARD).

Conditions at the research station were pushed to the fore when the station reportedly experienced an unprecedented increase in stock theft during July, with 102 cattle being reported missing. In addition, facilities at the station are in a deplorable state, including the fence surrounding this 11 500-hectare research farm, the living conditions of staff members, and the laboratory.

Up until a few years ago, the Mara Research Station boasted a proud and illustrious history spanning almost nine decades, with the station being considered the home of the indigenous Bonsmara cattle breed.

The history of the Mara Research Station dates back to 1934, when the then Department of Agriculture purchased several farms about 55km west of Louis Trichardt for the establishment of an agricultural research station. Among the young researchers at the station was Professor Jan Bonsma. He started research on cross-breeding the Afrikaner-, Shorthorn and Hereford cattle breeds and in 1953 announced that he had bred a functional and effective new cattle breed, called the Bonsmara. The name is made up of his surname and Mara as the name of the research station.

Following news of the deplorable state of the present-day Mara Research Station, the Democratic Alliance’s provincial spokesperson for agriculture, Mr Jacques Smalle, conducted an oversight visit to the station. Following his visit, he described the living conditions of staff as “shocking” and contributed the ease at which cattle are disappearing from the farm to the lack of a proper fence. He was also disappointed to point out that the laboratory at the station had not been functioning for at least 10 years now. “No tests are being done on site anymore. They are all sent away,” said Smalle.

Some good news came last week when the LDARD announced that most of the missing cattle had been recovered. The announcement was made after another oversight visit to the research station, this time by LDARD MEC Ms Nandi Ndalane.

According to the LDARD, an intensive search for the missing cattle was conducted by veld rangers and farm aids. “The search yielded positive results as 77 cattle were recovered. Many of these recovered cattle were found at neighbouring farms while some were found in the camps inside the farm. According to the reconciled records, a total of 95 cattle went missing as opposed to the 102 that was initially reported. With 77 cattle recovered, the search for the remaining 18 continues,” states the department in a press release.

Meanwhile, Ndalane applauded the cooperation the station is getting from all traditional leadership under Vho-Thovhele Kutama, whose villages are bordering the station. “We have a big problem of poachers who are hunting our game and our livestock, as well as firewood collectors from the villages. We are, however, pleased with the cooperation we are getting from the traditional leadership who consistently reports perpetrators each time they are found,” said Ndalane.

The Zoutpansberger also received a copy this week of the follow-up report from the portfolio committee on Agriculture and Rural Development into the issue of stock theft at the research station.

According to the report, stock theft remains a major challenge for the livestock industry in South Africa and continues to pose a threat to the industry’s potential growth. “Reportedly, the industry loses on average R105 million worth of livestock annually. Limpopo Province is no exception and continues to experience high levels of stock theft. Mara Research Station has not been immune to this challenge,” the report states.

As for interventions to try and curb the problem of stock theft, the report states that cases of stock theft are reported to the police and the department has also instituted an internal investigation. Whilst the police investigations are under way and the report from the internal investigation is awaited, the department has also recommended more interventions aimed at strengthening the existing security measures. These include, among others,  keeping the cattle in a kraal during the night, the erection of elevated lookout posts and moveable guard houses, designs for the upgrading of the border fences by the department’s engineers and repairs to the animal-handling facilities and livestock-watering systems.

At the time of our going to press, the portfolio committee was said to visit the Mara Research Station again this Friday.

A bathroom in the living quarters of one of the staff members at the Mara Research Station. Photo supplied.

The deplorable state of the kitchen facilities at the Mara Research Station that staff have to use. Photo supplied.

The laboratory at the Mara Research Station. As can been seen from the photo, not much is going on and, according to the DA’s provincial spokesperson for Agriculture, Mr Jacques Smalle, the laboratory has not been functioning for the past 10 years. Photo supplied.